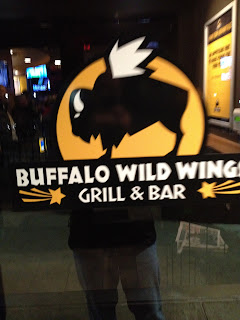 Americans are always looking for a way to eat until they explode. Engorging yourself until you feel like a pregnant rhino is almost a weekly tradition for many, others do it on a daily basis. You can get there many ways, either from a dollar menu downfall, burrito coma, Pizza Hut’s Stuff’d crust which may or may not be beamed down by aliens, or what has become my favorite excuse, “Wing Night”.  Buffalo Wild Wings Boneless Wing Night happens every Thursday, read on to find out if its worth your monetary and caloric budget. 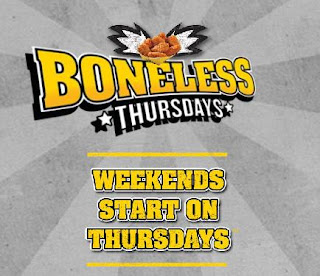 What can be constituted as a tradition that spreads from the mountains to the prairies, at local dives, to fancy bistros, to chain restaurants, wing nights are king. Some places go with an all you can eat format, some go with highly discounted rate per wing concept, but one thing remains steady as Max Starks’ love for Nakama, eat as many wings as you can, for as little money as possible, until you either A.) go running to the bathroom with fire coming from your keister, or B.) fall asleep face first in a plate of loss and despair. 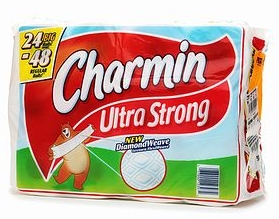 This quest led me and my correspondent, longtime FFG reader and friend, Cisco, to Buffalo Wild Wings (BWW) famed Boneless Thursday’s. Competing head to head with rival wingery Quaker Steak and Lube, Buffalo Wild Wings has recently opened its doors around our parts with not only one wing night but two. Quaker Steak offers an “All You Can Eat” format where you pay a stiff price of $13.99. Its only human nature to eat as many wings as you can to justify the money, leading you to stomach breakdowns and an increased reliance on Charmin.

BWW offers a $.45 cents per wing (bone in) Tuesdays and a $.60 per “wing” boneless Thursday. I prefer this format almost 7.5 to 1 because of the simple fact that I can try as much or as little as I want and not have the heavy burden of a fixed dollar figure hanging over my head like that student loan payment you have to make every month for the next thirty years of your life. Naturally we decided to go for Boneless Thursday, because it felt like more of a gimmick. After all, nothing screams irony more than wings without bones. Angus T. Jone’s weekly paychecks make more sense to me than this. 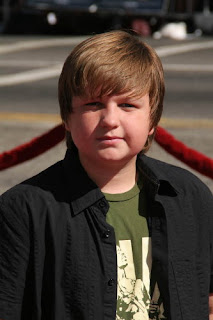 I’ve always found that the waiter/waitress pairing you receive is almost always vital for a wing night. If you have someone that’s attentive and swooping in every five minutes like a hawk on a deer carcass, then you’ll most likely get your money’s worth. But if you have one of those floozie airheads, that doesn’t know the menu or doesn’t understand the notion that you need her undivided attention like Tiger Woods’ lasik surgeon, you’re gonna be left angry, underwhelmed, and disgruntled more than that time you decided to order from the McDonald’s Late Night menu sober. 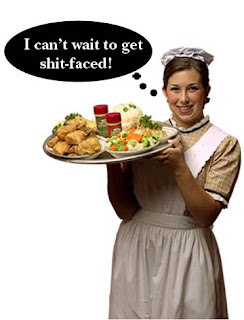 Cisco and I devised an early game plan to spread out the defense and them with an inside draw handoff by ordering 4 different flavors at once. This way we’d be getting an abundant amount of sauces to start out, planning ahead in case our waitress was a total mess. Sure enough she was, blonde, glasses, and terribly unenthusiastic, she barely even knew about the famed special. Awkwardly trying to create more unnecessary small talk than the office asshole on a Monday, we were left flabbergasted and confused. Ordering our first round of drinks and 4 flavors of wings was like performing brain surgery with a belt buckle. 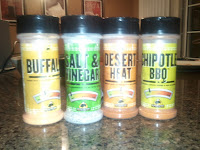 There is an abundant amount of sauces and “rubs” on the menu to choose from and picking options can actually be quite precarious. The last thing you want to do is order a dud sauce and end up with the embarrassing leftover remnants. Despite the daunting menu, we forged ahead and ordered Medium, Spicy Garlic, Asian Zing, and Honey BBQ to start off. With a 5 wing per sauce minimum in place we had 20 wings coming our way. 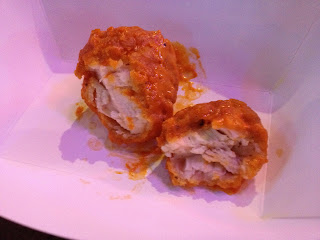 After biting in to the first couple, our general impressions were that boneless wings are little more than half dollar sized chicken nuggets. Resembling a chicken wing as much as Chaz Bono’s nether regions resemble that of a man, it’s amazing anyone can get away with calling these wings. Regardless, the chicken appeared to be all white meat, and the outside of the chicken was encased in what seemed like a heavy batter. Typically I think of wings having a flash fried feel where the outside isn’t really that dense, but the outside of the boneless wings were thicker than a bank vault. Not really a fan. 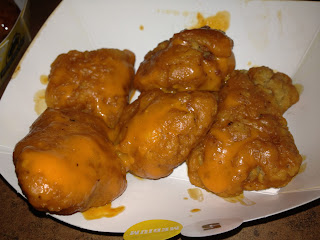 Pretty much your standard sauce fare. Still brings some heat and flavor, but not enough to blow you away. Pretty decent amount of kick for a medium though. 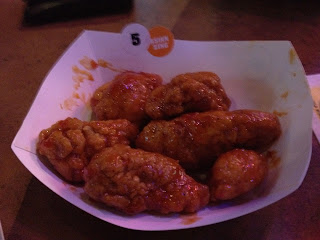 Became one of my person favorites. Think sesame chicken with a big bite. It’s like you got General Tso’s at a chinese place and the spicy symbol actually meant something. Right at the borderline of too spicy for someone with a weaker pallet. 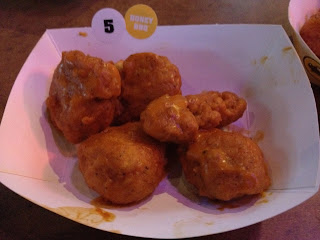 Another one of the best. Has the sweet taste of garlic with the spice and zest of medium. Flavor pounder here, with each bite poking your tongue like an over aggressive strep throat test. 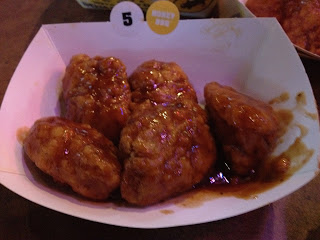 After round one, and already pretty full from the heavy batter each boneless wing provides, we decided to take on three off the wall choices: Mango Habanero, Parmesan Garlic, and Desert Heat. Provided we had to wait a good 15 minutes until our waitress stumbled over to us with the grace of Frankenstein and snuffleupagus’s demon spawn. 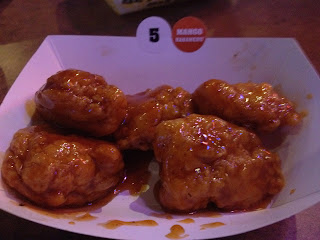 Third from the top of the spice spectrum, its hard to believe there are two spicier. The first bite was characterized by a sweet fruity flavor followed by a jackhammer to your face. The spice factor hits you like Santa loaded up his sack with cinderblocks and tear gas, and then wound up and knocked your socks off. Cisco was literally sweating and tearing up over this one. It was very flavorful, but committed my #1 foul with wings: being too spicy to be able to enjoy the next flavor. 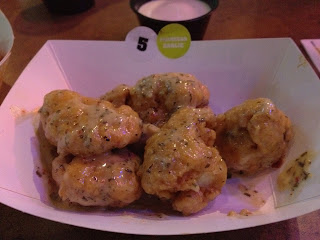 Mildest wing that we tried by far. Brought a rich cheesy and garlic flavor to the table. A very stark contrast to the Mango Habanero we just tackled, but a good one. Known by the locals as “Parm Gar”, it just wouldn’t be America if we didn’t somehow incorporate cheese to this event. 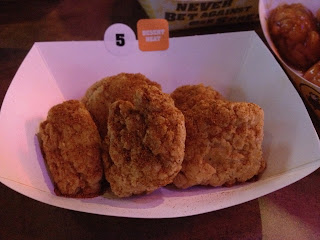 The only dry rub spice that we tangled with. Dry rubs were not meant for these boneless wings. With the crispy batter of the chicken, the spices didn’t consistently stick to the outside, leaving a mostly unseasoned experience. The spice was good where I could taste it, but it mainly felt like I was eating plain nug.

Boneless Wing Boneless Wing Night had its ups and downs. The price was right, considering we got 35 wings for a little north of $20. But the boneless wings, and their bountiful batter left our stomachs reeling. In a disarray, we were left feeling fuller than Rob Kardashian’s backside with nothing left to look forward to besides the inevitable half dozen trips to the bathroom. 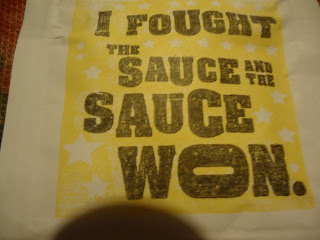