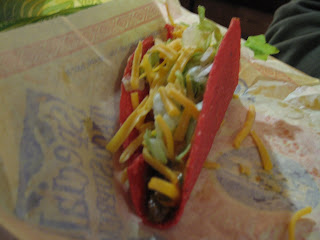 This is the debut of a series of mini reviews. No rules set in stone yet, but these reviews will typically be reserved for items that wouldn’t normally make up the meal; add-ons if you will.

I’m sure you have seen the ad’s for this on tv. The wild claims of how taco bell has created such a spicy item that steam would be emitted from the consumer’s ears. I felt as if these commercials were almost challenging me to see if I could take the heat. There are two components that are responsible for identifying this taco as a volcano taco.

The only purpose that the red shell serves is to potentially label which taco among your satchel of tacos is supposed to be the volcano. Other than that, it really doesn’t have any distinctive taste–my color blind colleague would have trouble identifying the red shell from the standard taco bell shell. Next is the cheesy lava sauce, which i’ve been told is supposed to be even hotter than taco bells fire sauce. Lets just say halfway though my taco, I found myself adding taco bell’s fire sauce to spicy it up more. The cheese sauce does have a good taste though, and when combined with the beef in the taco produces a delicious combination. 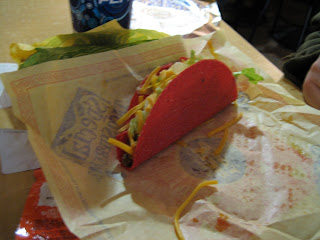 Because of the bold claims regarding the spiciness. I find it hard to give this taco a good review. The value added by the spicy factors doesn’t make me want to get this taco over the standard taco.

note: I’d be interested in re-reviewing this if taco bell introduced a soft tortilla version, this might allow for more taste differentiation between the original and the red.