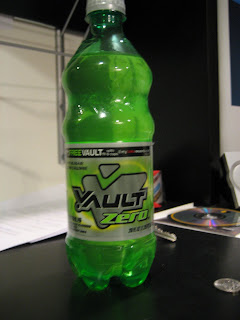 Ever since I began to realize that my metabolism wouldn’t hold me off forever, I have been drinking diet pop. From my past review on A&W’s Diet Cream Soda you guys can see that I search the ends of the world for niche beverages that are something new, exciting, and still diet.

So far some of the best ones I’ve found include the Coke Zero: Cherry, Diet Mountain Dew, as well as the aforementioned cream soda delight. The diet soda mentality is a lifestyle. One must commit to it or you’ll find yourself foaming at the mouth with a 2 lb bag of Sour Patch Kids to suffice your sugar fix. One must accept the fact that these don’t taste like regular pop, but the truly great ones come close to a moderate emulation.

I have always been skeptical of diet energy drinks. Energy drinks taste like rat poison to begin with, so I figured that taking the sugar out would only cause further disaster. I have tried diet versions of Rip It and Red Bull in the past and have come away with my tongue on house arrest.

This leads me to this interesting find, Vault Zero. Vault is an energy soda. This is kind of confusing because makers of Vault clearly are segmenting energy drinks and energy sodas. First off, I never really understood the difference. I was always under the impression that energy drinks were soda, but with a whole lot more caffeine and other herbal ingredients. Upon further review, it appears that energy soda only includes mass additions of caffeine and not things such as taurine and gurarana.

If you remember back in the day, Coke produced a beverage called Surge. It was later discontinued but according to my sources (Wikipedia), Vault includes almost the same ingredients as Surge but with even more caffeine. 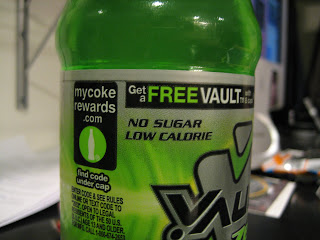 I was a huge Surge fan back in my childhood so whenever I saw that not only Vault had arrived, but its “zero” counterpart as well, I was ecstatic. I was quite confused by the label on the bottle that said that this was a low calorie soda. Upon further review of the nutritional information I was even further baffled. The label said that there were 0 calories in one serving but there were 2.5 servings in the bottle. The last time I multiplied anything by zero I ended up with nothing. So whether you want to believe this is a “low calorie” or a “no calorie” soda, it’s up to you. 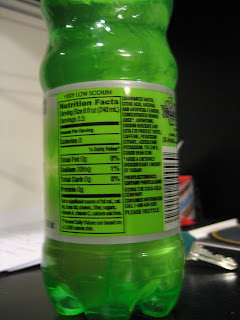 But in all honesty, this is one of the better diet drinks I’ve had in quite some time. Same great citrus taste as surge, plenty of caffeine to keep you awake during those pesky night classes, and still no sugar, (I’m also assuming no calories).

Vault Zero combines the benefits of caffeine without sacrificing taste or unnecessary weight gain. So I’ll have to give it a 4/5.