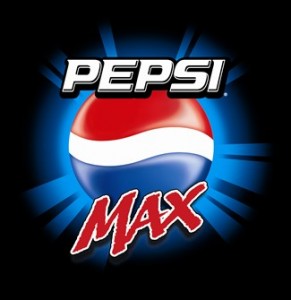 In the ever continuing quest to attain caffeine anyway possible, I find myself drinking diet soda at work to supplement coffee drinking.  When you sit at a desk all day, its pretty hard to not get drowsy at some moments, even if you got your 8 hours of sleep and take all your vitamins.  To most diet soda tastes like garbage, and the stale metal taste has lost most for good.  But with the advent of Coke Zero and Pepsi Maxx the calorie free cola world has started to blossom recently.

Pepsi Maxx burst on the seen some time ago, but I feel like it was really important to get my thoughts out there for the dedicated readers, regarding my go to diet beverage.  Diet Pepsi is trash. Simply put, it pales in comparison to Diet Coke, and is quite possibly rubber cement in a can.  That being said, I was dumbfounded whenever I heard glory stories about Pepsi Maxx.  Advertised towards men as a bad ass soda that will keep you energized, I couldn’t help but be enticed into trying it.

Packing 69 mg of caffeine in a single can, it crushes even Mountain Dew which has only a paltry 55.  Also adding the mysterious and modern sounding ingredient ginseng, Pepsi Max had the ingredients of an energy drink, but all of the makings of a cola.

Pouring it into my favorite Tyler Kennedy cup with 4 cubes of ice, the bubbles bursting and the click clacking of ice reacting with the radioactive liquid had my stomach ulcer raging inside of me.  Sipping in, I was comforted and relieved with a smooth and flavorful jolt.  Straying from traditional diet soda, Pepsi Maxx has a burst of flavor that is actually enjoyable.  While it doesn’t have the grand taste of a sugary regular pop, it brings something to the table at least.  If you’re a diet soda drinker like me, you know that this means a lot.

Along with that satisfying taste, the energy that Pepsi Max provides is a godsend.  While I don’t get overly gittery like with energy specific drinks, I get that boost that I crave to get through the day without forcing down something that tastes like wood glue.

One gripe about Pepsi Max, is that it gets flat quicker than any soda pop I’ve ever come in contact with. For those of you who don’t like carbonation this could be good, but for many its a negative.  So just drink it up quick!