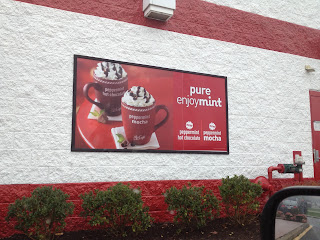 For the longest time McDonald’s has been known as fast food juggernaut, but despite their unparalleled success of pumping susceptible and belligerent college kids with the drunk menu (how do small drinks disappear after 11?) and getting the overweight and obese (86% of American according to that ridiculous bmi chart that prob says the Olsen twins are obese) masses to plunk down a couple bucks midday for a quadruple digit calorie lunch, McDonald’s certainly has never been confused with Ruth’s Chris Steakhouse or the like. But starting with the with the emergence of a high quality Angus Third Pounder, their Fruit and Walnut Oatmeal, and then this summer’s weekly dosage of a fancy fruit laced frozen beverage, McCafe, and its vast array of options is McDonald’s best attempt yet at making premium items at an affordable price. With hot chocolates, mochas, fruit smoothies, frozen lemonades, McCafe aims directly at the Starbucks and Caribou of the world.


American’s clearly love spending way too much money for shoddy beverages that can sometimes taste like a mix of mud and hitch hiker’s sweat. What really remains evident to me is that people will spend tons of money to get the America’s most abundant legal drug, caffeine. Caffeine and the energy it provides is the hot commodity that the common working folk craves more than Lindsay Lohan yearns for heroine and attention. While the big wigs and fancy pants of the world can justify spending almost an hour’s pay at minimum wage for their soy non fat double half caf latte, most of the normal people of the world have trouble justifying it.

This is where McDonald’s steps in.  They already take advantage of everyone’s desire for cheap processed food, why not cheap processed coffee as well? We’ve already reviewed McCafe’s og offerings years back, and we were impressed back then, but at this point, McCafe is so entrenched as permanent menu items that the once gimmick menu section can now release its own seasonal gimmick selections. 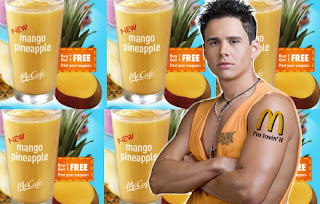 Entering for the holiday season, which now apparently starts before Halloween, is the Peppermint Mocha and Peppermint Hot Chocolate. While pumpkin flavor is the fuel for fall, peppermint decided some time ago that chocolate candies after your meal at Olive Garden just weren’t enough, it needs some more pub. So peppermint has since become the defacto winter spice. I for years, have been a closet Peppermint Mocha fan at Seattle’s own. Starbucks. But I can tell you one thing, it really grinds my gears to shell out 4 plus dollars for a drink that could I could probably make if I were so inclined. My name would also have to be Shelby or Tucker, those seem to be some classic barista names, but I digress.

It’s the same idea of buying a t shirt so expensive, that it might be more worthwhile to cure world hunger with the money you’d be spending.  So when I saw these bevs being brandished by the ol’ yellowish arches, I for one was actually pretty pumped. Would these be the holiday drinks that I’ll start yearning for every year whenever it started to snow? (actually the way things are going this drink will come out in July next year) Would these be my cure for my Starbuck’s addiction? Will KFC refer to their employees as Chef’s? Will Dave Thomas’ daughter come out of the woodwork and reveal that she’s not the slender red head that everyone thought? The answer to all of these questions would be a resounding yes.

After a night of boozing with my girlfriend and another couple, nothing hits the spot like a sloppy fast food breakfast. Something about grease and caffeine revitalizes the body and soul like nothing else. Don’t quite understand why putting your stomach through a second round of torture does the trick, but I don’t mess with science. So before hitting the highway on a long drive home, my girlfriend and I stopped by McDonald’s for an All American grease engorgement. But whenever I was almost bumper deep into the drive thru, inspiration struck in the form of the poster at the top of this article. It was time to sample on some of that sweet nectar. True story, I slammed on the brakes, whipped out my phone to photograph that poster, almost causing a three car pileup behind me. But hey, there’s not much you can do when inspiration strikes an artist…
After ordering a medium of each, I was pleasantly surprised by the prices, $2.50 for the medium Peppermint Hot Chocolate and $2.99 for the medium Peppermint Mocha. Each of these were at least a dollar less than the equivalent grande at Starbucks. Yeah, grande is a medium, I’ll never understand that one either.
After interacting with two very jolly and a little bit too engaging for 10 AM on a Sunday, McDonald’s employees we were given our beverages and satchel of grease. Though the drinks are presented in the ad in an over the top, wood lodge in a wintery field, manner that could never be replicated in the fast food world, I was pleasantly surprised by the whipped cream wonderment at hand.
That’s some pretty solid presentation for a drink made by someone with an Associate’s degree in basket weaving. The whirling flourish of whipped cream topped with choco syrup left me in somewhat awe. It wasn’t the wintry mug from the poster, but for a to go cup I couldn’t have been more pleased. Bob Ross couldn’t have painted it better himself on public broadcasting. 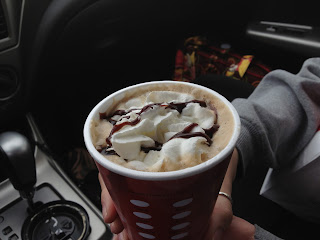 The picture above is the Peppermint Mocha, the drink I was most excited to give a try. After all this was the one that would be taking on Starbucks’ in an imaginary heavy weight bought between my taste buds. Taking a sip, I could have been blindfolded and hog tied and wouldn’t have noticed a difference between this and it’s brother from the northwest. It felt like I was in Grandma’s kitchen, a honey ham roasting on a spit, and the pitter patter of sleigh bells in the distance. The feel of the holiday season was upon me. The mocha flavoring was there in full force, less bitter than other mochas I’ve encountered.


Although not a taste suited for every pallet, it’s something that I’ve grown to be fond since I started my caffeine addiction in college. The one thing I would have to knock is that there simply wasn’t a ton of peppermint flavoring. While I understand that you don’t want to kicked in the face with the flavor, it would have been nice to have a little bit more than faint tracing I received. I really think this gives the fancy coffee house version a run for its proverbial money. Not nearly as bitter, lighter on the wallet, and still a verbose mocha taste that would make Ray Charles scream “Oh, Heaven have mercy”.


And who knows, the lack of peppermint flavoring could have easily been a rookie mistake by the braces laden adolescent who made this particular one. For all of these reasons I’m sticking the McCafe Peppermint Mocha with a solid 3 star rating. Keeping in my mind we’re being stingier than a long island lawyer with these ratings, so that’s a solid score. 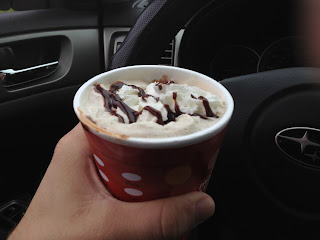 Next was the Peppermint Hot Chocolate.
Hot Chocolate has always been that winter time delight that people, young and old, use to cure their wintertime blues. Whether you’re freezing your face off, trying to soothe your gullet after a long day of grinding, or you just had a tough day on the jungle gym (and hard liquor just isn’t the answer), hot cocoa replenishes the soul and eases the mind. Who doesn’t like a mug full of chocolate after all? So while hot chocolate doesn’t have that dignified and intellectually stimulating bravado that a latte or mocha personifies, it has a devoted fan base that only Ellen or Toucan Samuel could probably rival.


Taking this into account flavor variations of hot chocolate usually haven’t worked for me in the past, the og has been my standby, loyal to the bitter end. So going into this taste testing, I was a little skeptical, but given the fact that McDonald’s has rarely swung and missed in recent memory, I held the faith. Instant reaction was an overwhelmingly more pepperminty taste than the mocha. With the softer taste of hot cocoa and a rich, strong mint burst, I feel like this drink could be vended to the masses.


Mochas to me are more of cult classic, coffee drinkers will enjoy its gregarious, bold taste; but the untrained, inexperienced pallets of the world don’t often take to it.  This is why I really feel like McCafe hit it out of the proverbial ball park with the Peppermint Hot Chocolate. With the wintry feel of hot choc and the seasonal taste of the holidays, it takes like winter cubed. The easy going siptastic taste gives this treat at 3.5 star ranking.
Overall I was impressed and inspired by both of the newest McCafe concoctions.  Honestly, I won’t be going to Starbuck’s and Caribou anytime soon with McDonald’s pumping out cheaper selections that quite honestly taste better. So if you’re down and out from a long day at the salt mines, want to jump start that holiday feeling, or if that iv of caffeine hooked up to your arm just isn’t doing it, hit these bevs up. They’re fast food geek approved!
Peppermint Mocha: 3/5 Stars
Peppermint Hot Chocolate: 3.5/5 Stars 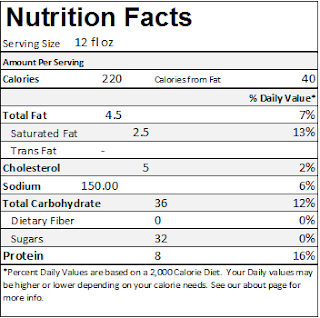 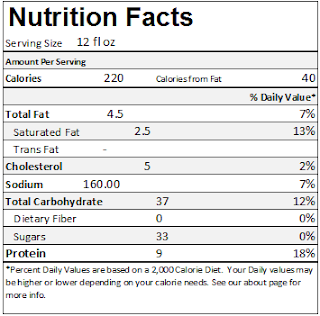