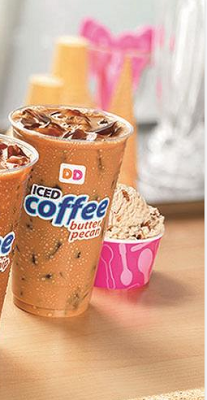 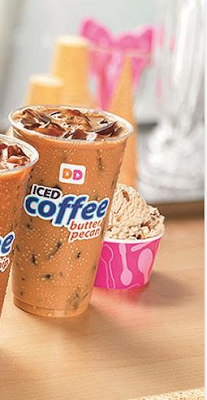 While the thoughts of Butter Pecan seem to immediately make me think of the elderly, it’s popularity as an ice cream flavor for Baskin Robbins.  Whenever you search “butter pecan” on the Google, the second item after the Wikipedia article is BR’s website.  So it only made sense that whenever Dunkin Donuts unveiled their Ice Cream flavor inspired Iced Coffees, Butter Pecan would have been one of the two flavors alongside Mint Chocolate Chip.

In an attempt to keep the calories down, with most any coffee drink, I typically go black at this point, but for the sake of sanity and the common folk, I went with skim and Splenda.  This is the same as I did for the Mint Chocolate Chip Iced Coffee review and what I got this time was an extreme visual difference.  It must have been a rookie, green horn working whenever I got my last one because despite my order that one was black and this one has the tanned appearance of milk laden coffee.

This beverage also fell victim to the classic iced coffee issue of there being a packet or two of Splenda at the bottom of the cup making the first two sips being almost crunchy with all of the artificial sweetener crystals hitting your tongue.  I know better, so I gave this a gool ol’ stir before sipping down.

The buttery flavor hit almost instantly giving the drink a real sweet and warm taste.  It’s pretty hard to really gain an appreciation for the pecan aspects of this drink, but the syrup really did remind me of the Baskin flavor unmistakably. This flavor is very reminiscent of Worther’s Original hard candies and being around senior citizens.  It’s not my particular favorite flavor, but for those of you who appreciate it, head over to Dunkin’ because this tastes like the real McCoy.