Having tackled the gimmick collection of minty offerings from McCafe a few weeks back, in my benevolent fashion, I felt it was quite necessary to test the taste of an offering with the same name whenever it sprouted up at my local Dunkin’ Donuts. You’d never know considering Dunkin’ refuses to publicize any of their promotions on their website’s front page. One literally has to lurk through each and every page on the site, and then ascertain that nothing new has plopped up. After performing said process, it became abundantly clear that the Mint Hot Chocolate was a new found promotion. 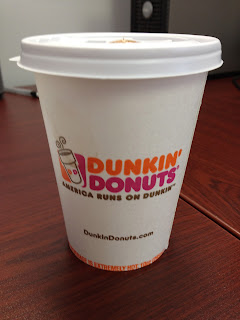 Rationalizing that it was National Cappuccino Day yesterday (I’ve come to realize that I can rationalize any food purchase if I try hard enough), I rambled over to my local Dunkin’ on my lunch break and breezed through the drive thru.  It appears as though this particular Dunkin’ must have had some theft issues from there employees because underneath the payment window, a digital screen saying “if you are asked to pay something other than this amount [Total Amount] ask for a manager” was displayed. I’ll have to admit I never concentrated more on what the employee told me that I owed than after seeing this screen.
Advertised on their site, with a clever yet overly punny blurb, the Mint Hot Chocolate would supposedly warm me up and cool me down with an invigorating sensation.  Sounds more like a prophylactic commerical, but I figured it was my “momint” to try one. 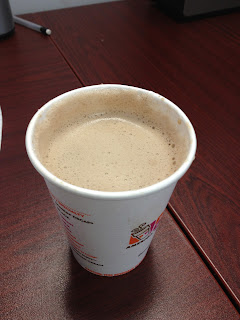 After dabbling into this dark delight, I was blown away by the smooth and creamy consistency of the hot chocolate. While the McCafe offering was more watery, this had the rich and soothing effect of what might have been dairy.  Dunkin’s hot chocolate has an almost Yoo Hoo flavor to it, a flavor I grew to love as an adolescent.  The mint flavor was brilliantly intermingled, was not over powering, yet was still very apparent.
I’d have to say that the Dunkin’ Donuts Mint Hot Chocolate is a very solid beverage, one that I’d definitely choose over the McCafe in a blind taste test.  4/5 stars for this sassy sensation.
Dunkin’ Donuts Mint Hot Chocolate 4/5 Stars
~Andrew
@atkpitt12
Small Mint Hot Chocolate 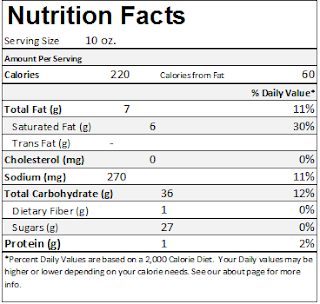