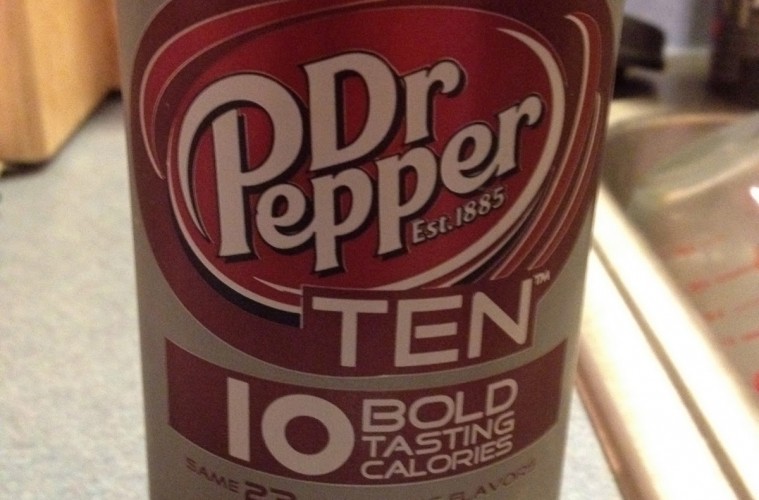 As many of you readers know, the FFG staff loves themselves a low calorie beverage. Plenty of words, paragraphs, and run on sentences have been devoted to the drink industry’s many attempts at crafting the greatest “diet” or “light” libation out there.  I can’t imagine living in a day and age where diet cola was the only option to gulp something down with out feeling guilty about your girlish figure later. While I’ve done away with drinking full calorie pops long ago, unless extreme circumstances exist, I’ve found myself doing my best to limit my intake of diet ones as well.  Artificial sweeteners, first of all never made sense to me. How can you add something that sweetens, and yet doesn’t add sugar or calories. The answer is chemicals, and while I’ve never claimed to know a lot about them, or played someone who did on tv, I know that stuff like aspartame and sucralose just isn’t good for you in mass quantities. There’s been studies that they cause tumors and brain farts, but nothing really has been nailed down for sure. I just know that, long term, its probably not good to crush diet soda like David Arquette crushes coke.
While the “Diet” Orange soda makers have been releasing it for years, the idea of a “low calorie” pop is just starting to hit the mainstream. Thus enters, Dr. Pepper Ten. The idea,  let’s add 10 calories per serving and only 2 grams of sugar, to make our beverage actually have some real and vibrant taste instead of the exceedingly artificial and bitter sweetness that a purely zero calorie drink emits. While the FDA will never be giving the good doctor any awards for making a healthy drink (aspartame is still present, and the dreaded high fructose corn syrup rears its fugly head), the world is still a better place for having good tasting, low cal drinks.

Dr. Pepper takes a bold move with this bev offering, considering that its original Diet Dr. Pepper is world renowned for its rich flavor for a diet drink (it’s recipe is so secret, that employees aren’t even in the know regarding its ingredients).  But like all good companies, the M.D. shows some cajones and risks it all on the river with a new competing health conscious drink with “10 bold tasting calories”.  I had high hopes, this is something radical for the pop industry, and I really wanted that full flavored, regular DP taste to be right there in the flesh.

Cracking open a can and pouring it into a nice glass of ice, I let the head of the drink subside and took a nice long gulp. Flavor festival ’11. That’s all I can say. Well actually I can say that there is a noticeable, and even some may say,obvious difference in taste and crispness to this drink.  No stale and overpowering fake sugar taste, but only a natural and even sugary tang permeated the surface. Whatever those 23 flavors really are, they were all there, present, and accounted for, like school when it’s taco pizza day. I can truly say that this drink got in the left lane and hit the hammer to the floor, and high octaned itself all the way to the top 3 of my favorite calorie conscious pops. And it’s there in flying colors.

While I don’t understand the great Doc’s idea of promoting this drink solely towards men, even saying “Not for Women” in their ads (why would you ever want to alienate half of the earth), it may even twist the female’s wrists and get them to purchase Ten out of spite.  It’s definitely a new marketing strategy, pissing off people into buying your product, but hey what do I know? Regardless, I’m giving Dr. Pepper Ten and all of its bad ass, smack you in the mouth, eat you for lunch, crush your chest, donkey flip your dungarees calories a 4/5 of stars. Go ahead and grab a sleeve of these bad boys. You’ll be amazed at what 10 calories can do.
Dr. Pepper 10: 4/5 Stars
~Andrew
@atkpitt12