Hardee’s and Carl Jr. Attempt to Heat it Up with New Southwest Patty Melt and Ad Campaign [Report]

Hardee’s and Carl Jr. are in the midst of an ad campaign that seems to be solely focusing on men. After all, spicy food and swimsuit models certainly don’t seem to be aimed too keenly on the female demographic.  With other ad campaigns such as Dr. Pepper Ten, where they practically insulted any woman who took a sip of the carbonated liquid, it seems as though many restaurants and companies are throwing caution to the wind with their ads.

The new Southwest Patty Melt features a charbroiled beef patty, with jalapenos, pepper jack cheese, onions, and Santa Fe sauce on grilled bread.  One thing to love about Hardee’s/Carl Jr. is the fact that the burgers come in three different sizes to appease any appetite.  The 1/4 lb, 1/3 lb, and $6 Thickburger sizes can take the forms of anywhere between snack through feast or lightweight to fat ass.  I also love sauces named after cities.  Nothing emulates spiciness than the city of Santa Fe.  The whole town must be made out of peppers and spices. Regardless, the big, beefy, burger looks sinfully delightful and quite spicy to boot. 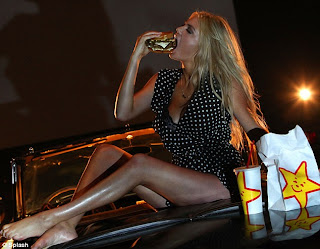 But what really has fast food nation in an uproar is the ad campaign featuring 2012 Sports Illustrated Cover Model Kate Upton.  The commercials which began a week or two ago feature the supermodel sitting on the back of a car, crushing the burger, which looks pretty hilarious. It absolutely doesn’t make any sense and has nothing to do with burgers. But apparently Hardee’s and Carl Jr. think it’ll sell burgers. Because after all, if you eat the South West Patty Melt, Kate Upton will think you’re cool.