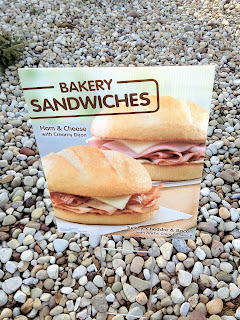 Earlier this month Dunkin’ Donuts started their wild and adventurous journey into the lunch realm with the Texas Toast Grilled Cheese, which we thought was pretty robust, but also greasier than your little brother’s forehead after gym class. With such a hearty option carrying the way, it would be hard for Dunkin to insert themselves into the everyman’s lunch rotation. But enter stage left, double D has bolstered their lineup with two new Bakery Style sandwiches on what appears to be newly introduced French Bakery rolls.

While not venturing too far off the beaten path with the sandwich choices, Dunkin brings a Ham and Cheese (white cheddar) with a dijon mustard spread and the Turkey, Cheddar, Bacon with an acho chipotle sauce complimenting it’s innards. These aren’t big risks as far as the meats and cheeses, but as we’ve seen plenty of times before, the sauce on a sandwich can be a mystifying creature. Either entirely neglected or fed with enough propaganda to halt a political campaign, a sauce can make, break, or degredate most any sandwich. 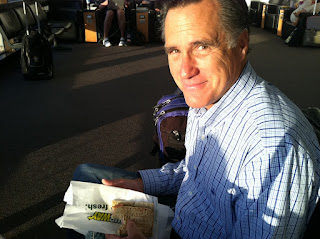 Competitively priced at the usual lunch time benchmark of a $5 combo featuring the sandwich and an iced tea or iced coffee (10 cent upcharge), Dunkin is trying to weasel its way into the Subway regular’s realm. The sandwiches go for a cool $3.73 solo, if you’re not in the mood for a beverage. Mike and I tag teamed this review with each of us trying out one of these bakery treats. 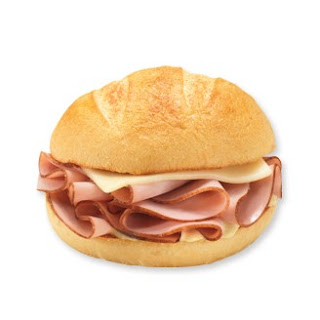 Our first stop is to the wonderful land of Hamtown, USA. A pretty basic sandwich consisting of deli sliced ham and white cheddar, and some dijon, we weren’t overly excited for this particular offering because it didn’t really have much flair on the surface. But after digging in, we were pleasantly pleased.
While the ham certainly wasn’t laid out in the volume-tastic nature of the ad photo, and lazily plopped onto the roll with a depressed and flattened flair, what really stuck out to me was the French Bakery roll. Freshly baked on premise, with a sultry scent that swept through the car, and a dense, robust, girth that could rival most bowling balls, the carb crusher inside of me began salivating like Pavlov’s dog’s at high noon.
Counting up the slices of ham, there appeared to be 5 slices smooshed and pressed together, along with a finely melted lava like cheddar embedded into the bun. It may not look like much, but upon biting down, the ham was plenty suitable and somewhat abundant.
The dijon mustard was spread on the bottom bun, and although it wasn’t fully encompassing the surface area, it provided enough zest to get its message across. 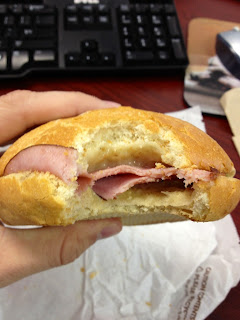 What really stood out to us was the crunch of the bakery style bun. It was very crusty, in a good way. A very tangible bite down was required and gave the sandwich a whole lot of sustainability. Despite being somewhat melty and gooey in the middle of the sandwich, there was no slippage or bun leakage that typically befuddles lesser buns. Nothing could penetrate this roll besides your lateral incisors. The bun might have been almost too large and in charge, with the middle area puffing out to almost unhinged jaw width.
The Ham and Cheese racked up a 3.5 for us, with a bold mustard taste carrying this otherwise standard ham and cheese right into the heart of Flavorhill Farms.
Next up was the decisively more bold and buxom Turkey, Cheddar, Bacon. Adding bacon to almost anything presumably makes it better. Bacon should double as currency as far as we’re concerned, and its usually pretty hard to screw it up. But did Dunkin’ do just that?
Stacked with three thick slices of turkey, a melted development of sharp cheddar cheese, and a healthy sampling of what Dunkin’s web site refers to as “cherry wood smoked” bacon, and a wild, exotic sounding ancho chipotle sauce, the composition of the sandwich has the makings of a real winner.
The sauce provided a nice smokey complex to the sandwich, with the turkey and cheese providing stable consistently constant nourishment, but to the surprise of many, and to the shock and awe of our reviewing team, the bacon is clearly the low light. Limp, floppy, soft, and flaccid, this is everything bacon shouldn’t be.
I don’t really understand the pros and cons of a cherry wood smoke vs. an apple wood smoke but it doesn’t seem like the cherry cuts the proverbial mustard. Bacon should be thick, crisp, and bountiful and this was anything but. Sad as it is to say, all the bacon provided was flavoring because of its vacant texture, it was hard to tell it was even there.
Despite this we still think the sandwich was a 3.5, but it has a much higher ceiling provided the bacon gets a makeover.
So there you have it, Dunkin’ now has some decent lunch options, and with each having under 500 calories and only 14 grams of fat, reasonably healthy ones at that.
~Andrew & Mike
@atkpitt12 @mikeparavati
Ham & Cheese: 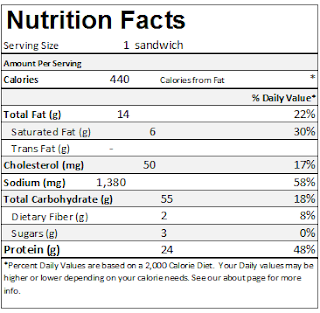 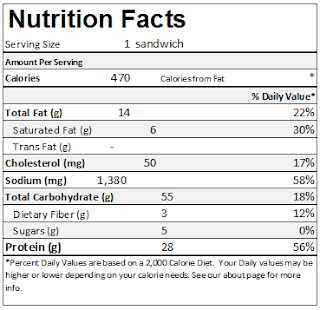