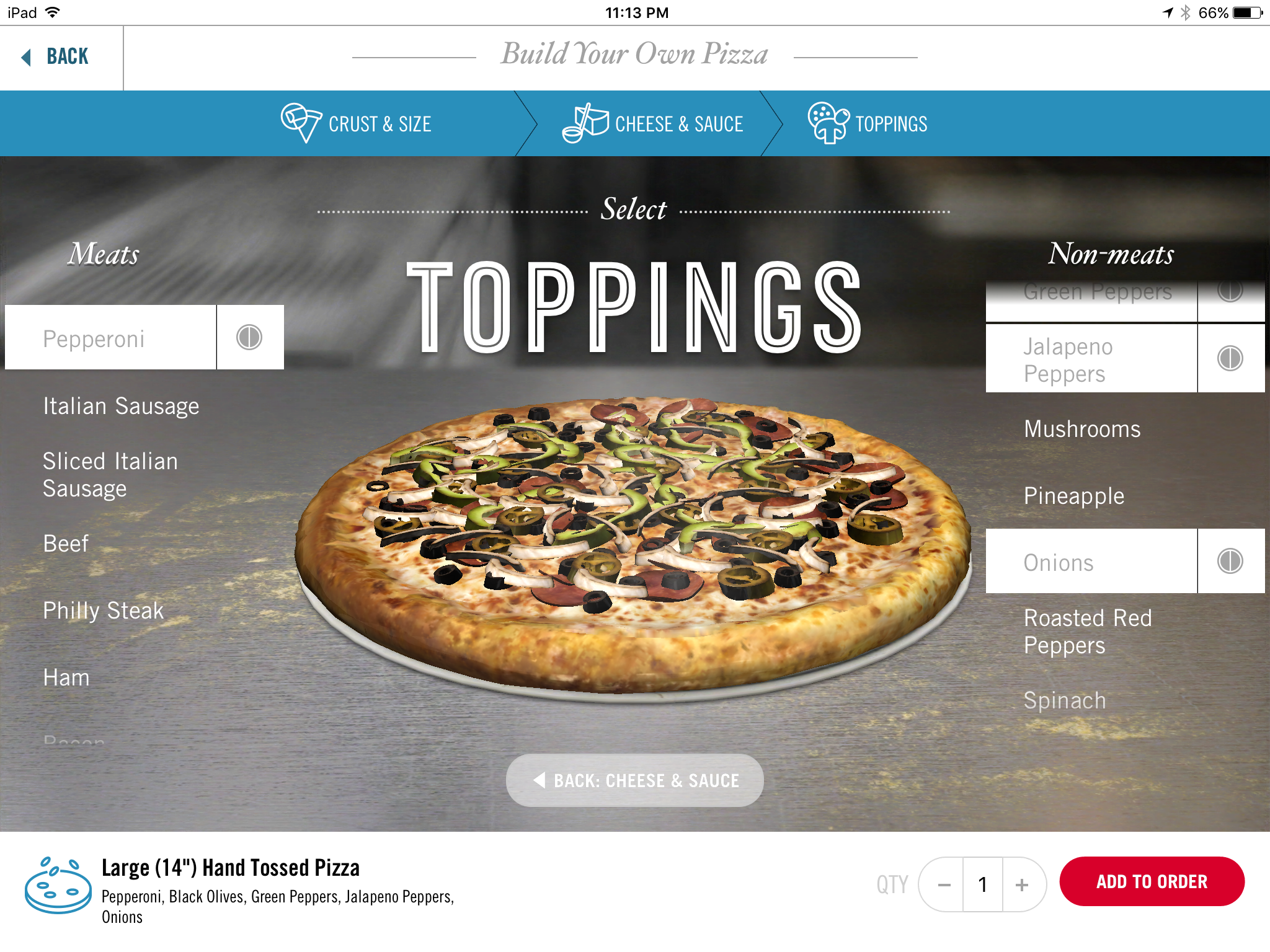 National franchises are all looking for ways to build customer loyalty and remove all friction from the ordering process. They’re all, with varying degrees of success, leveraging technology to try to get you to order more often. We’ve decided to start testing out and reporting back on the experience of using various apps and websites as these continue to be more and more prevalent.

Starbucks is hoping their app will get people in a hurry to stop in. Taco bell is using their brand new website and their mobile app to increase average order prices by allowing for ultra customization of orders. And pizza places like Domino’s are trying to use emojis and their mobile apps to get you to choose them over the competitors.

In this post we will focus on the Domino’s Mobile App (iPad version) and their Rewards program called Piece of the Pie Rewards. 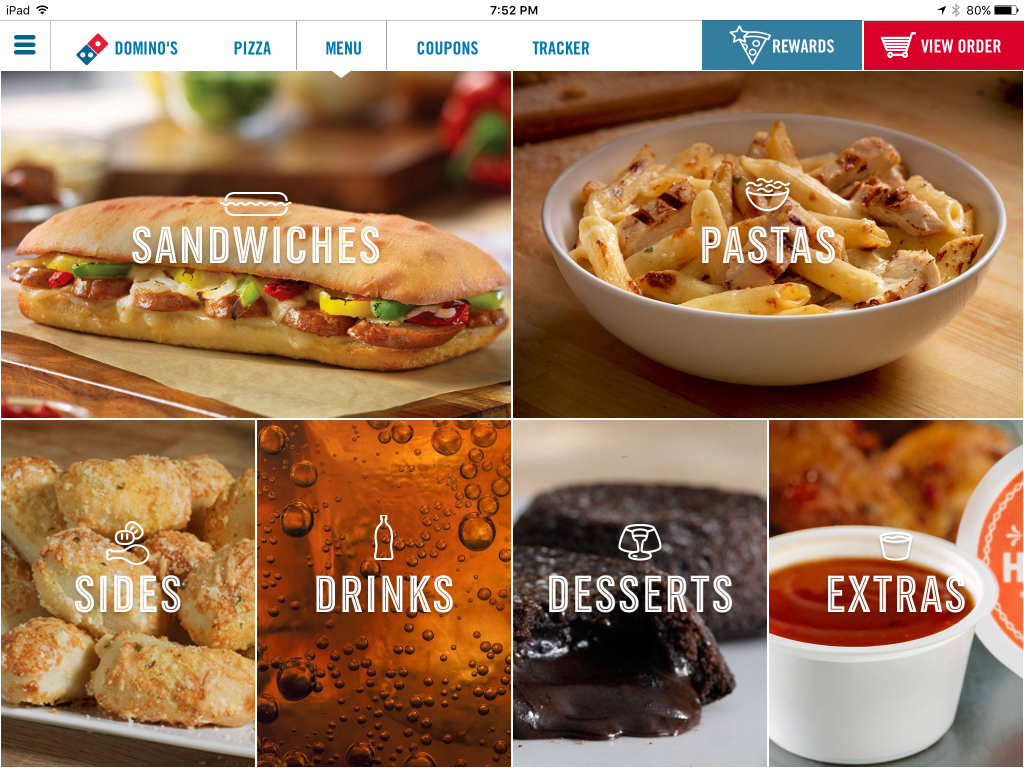 When you first fire up the Domino’s Mobile App you can create your Pizza Profile.  Sign up by filling out a standard sign up form and opt in to the Piece of the Pie Rewards program.  Going forward, you can quickly re-order based on your recent orders and even “Save as Easy Order” if you have a go to.  When you have an “easy order” set, the app home screen splits into two main section, easy order and your recent orders to make re-ordering very quick.  [This step is very important if you want to order pizza via emoji… if you tweet the pizza emoji, you should receive your easy order… don’t do it] 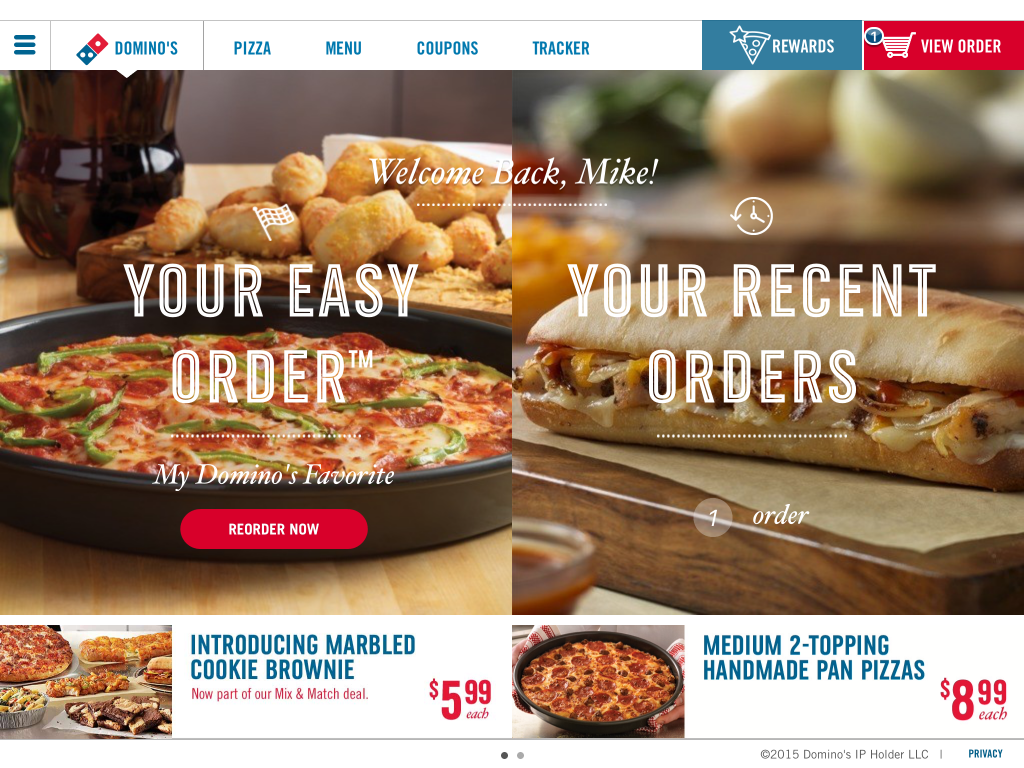 Across the top you’ll find four main section:  Pizza, Menu, Coupons, and Tracker.  Domino’s has really been working hard to try to convince people that they have more than pizza.  Not only did they remove “Pizza” from their name and shamed restaurant owners who did not update signage, but also are currently promoting a hashtag #morethanpizza.  So its kind of interesting that pizza is still separate from the menu tab.  There’s pizza… then everything else.

When you select pizza, you can select to build your own, or pick a specialty pizza: 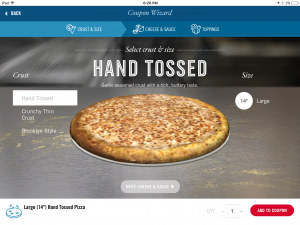 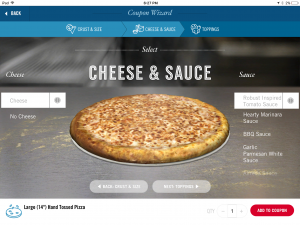 Its kind of fun to see the graphics change as you add things to your virtual pizza or change the sauce.  If you do no cheese, the cheese goes away.  Interestingly, in the below picture, if you change your cheese preference based on how much cheese, the picture doesn’t update…  Below I selected left side no cheese and right side triple cheese and it does not change.  A little note appears “NOTE:  Your cheese has been adjusted! Although you can’t see it on your pizza now, we’ll get it right.”  Skeptical… 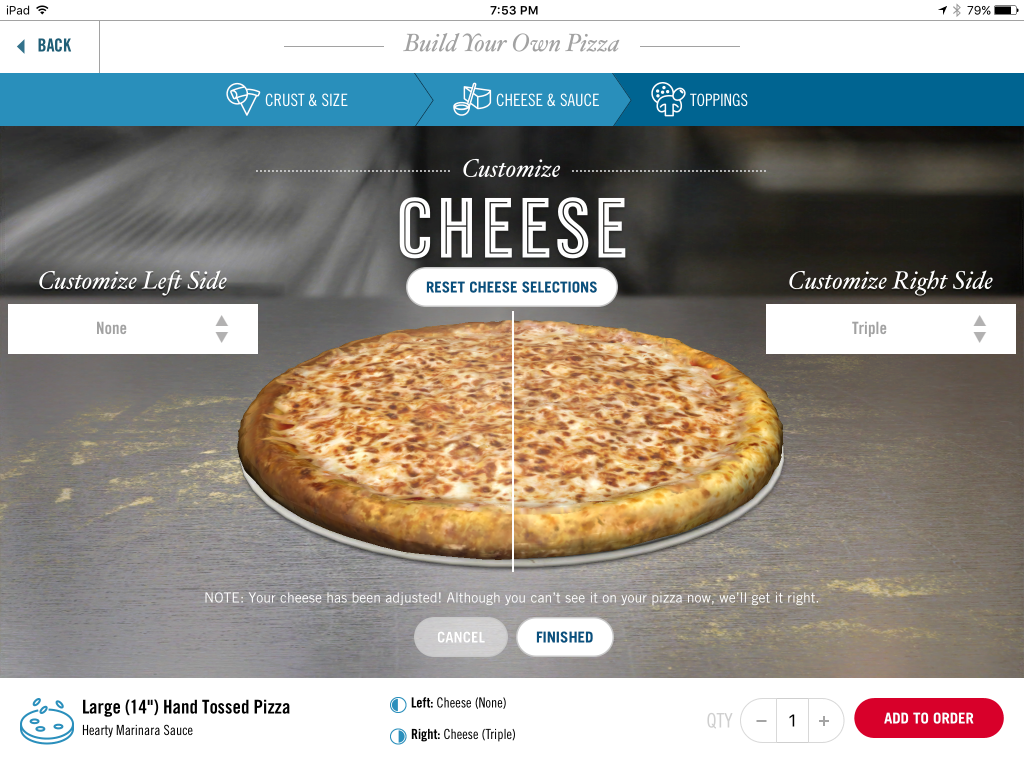 One area of the app that I felt was super confusing is the Coupons section.  Here, based on where you say you’re ordering from, Domino’s presents you with both national and local coupons.  I realized that the Medium two topping pizza I was building was the same price as the large three topping coupon.  So I started over and used the coupon.  When you add a coupon, the app tells you when you’ve satisfied the requirements for that coupon: 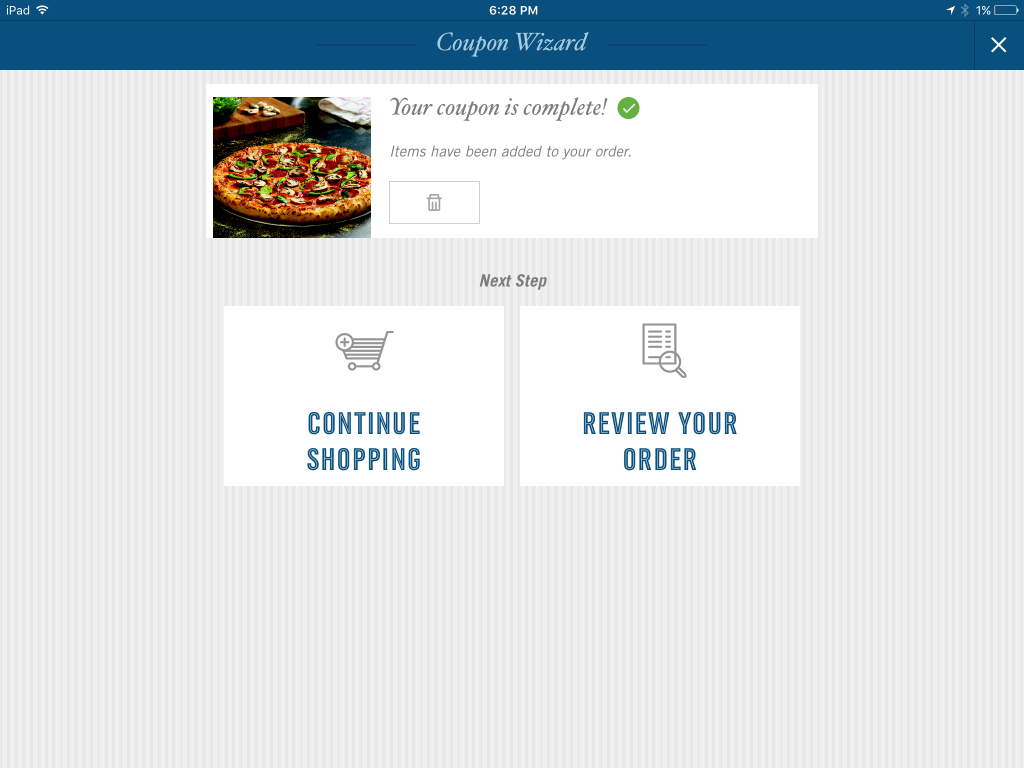 The problem is, there are really similar coupons and you might not be selecting the best deal.  I didn’t realize until I ordered my pizza and went to the store to pick it up, that there was a significantly better deal being advertised in the window.  When I walked in to pick up my pizza, the employee said “$14.14” but I had noticed a promotion in the window for the same thing I ordered for 7.99.   Fortunately I received the adjustment after asking for it.

When I got back, I checked the app and both coupons are available.   One has “day of the week” restrictions associated with it.  I guess they can show you the door, but you have to walk through it… or something to that effect.  Its nice that the coupons are right there in the app, but it would be even nicer if there was some logic built in to suggest a coupon or tell you that theres a better deal than what you’ve selected.  In the next image, the two coupons in the center column are for the same pizza but one is 12.99 and on is 7.99 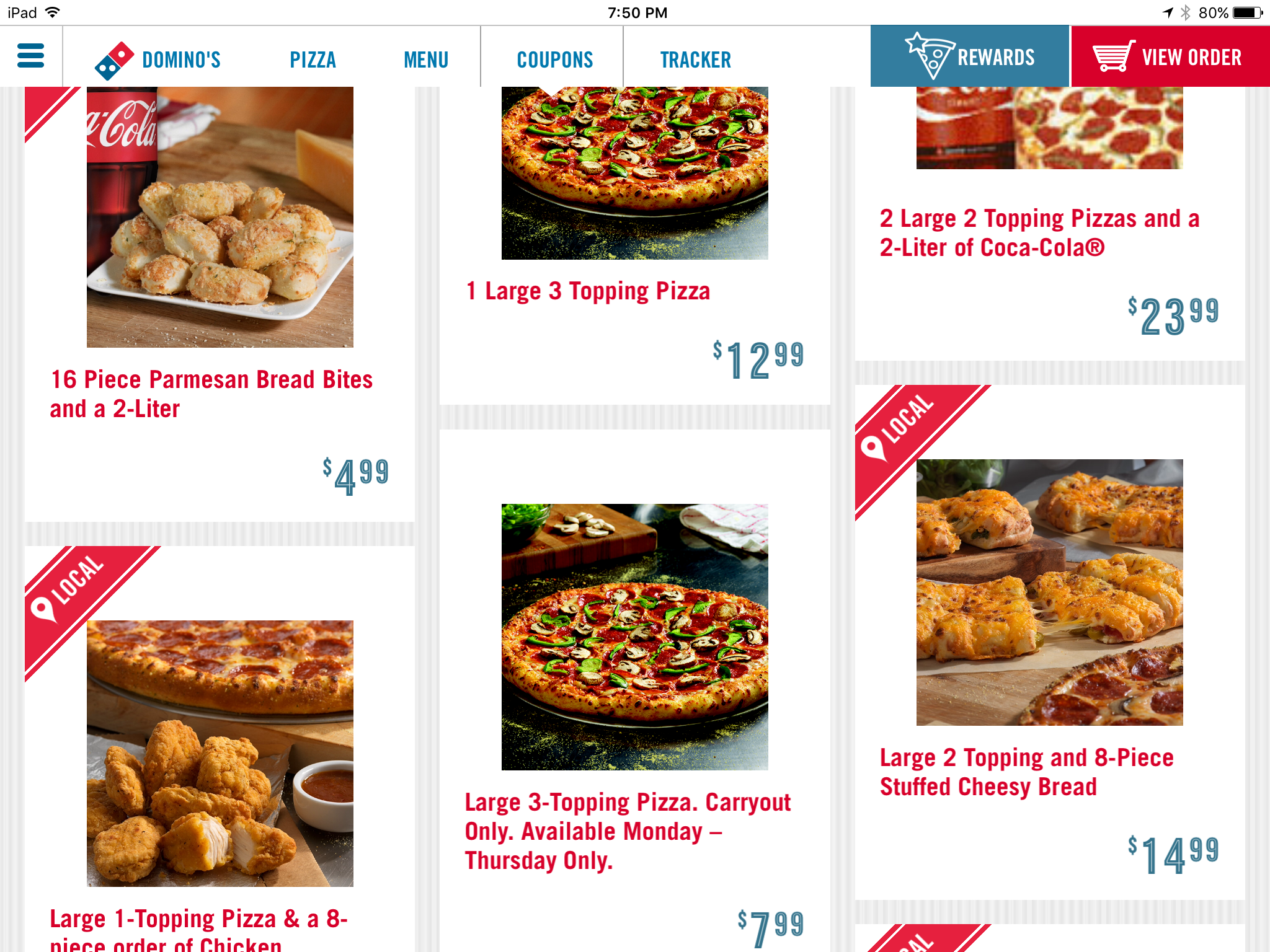 Another strange hiccup I encountered was with the pizza tracker.  I watched my pizza progress through the stages.  Then.  Suddenly.  According to the app.  My pizza was picked up.  Anxiety set in.  I knew it was an error… but what if it wasn’t… What if someone has my pizza and is roaming the streets with my pizza.  I talked myself down, and instead fast walked to my domino’s location and was relieved to discover my pizza was there. 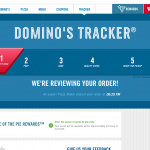 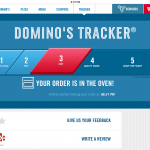 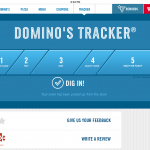 In the end, everything worked out–I got my pizza, and got the deal.  Its definitely a better experience than digging through drawers of crumpled outdated menus, and calling to ask if there are any current deals.  Its also better for the millennial crowd that hates making phone calls.  Domino’s Tracker is pretty nice too for people like me that absolutely can’t wait for pizza and eagerly looks outside for the delivery man from the moment the order is placed. 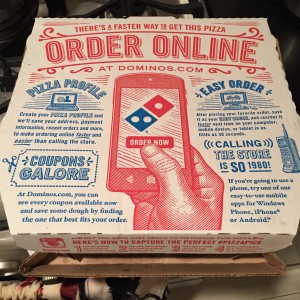 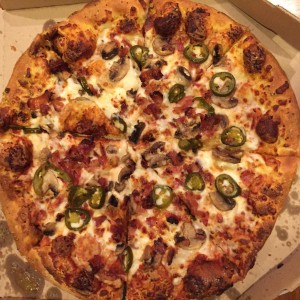 A couple “fine print” stipulations.  You can only earn 10 points per calendar day, so if you order twice in one day,  you only get 10 points.  Also, my order above was 7.99, so I did not earn any points.  If you have an insane amount of points, you can only redeem 25 free pizzas….. so keep that in mind.  And the final stipulation of note is that if your account is inactive for 6 months without an order, you lose any points you’ve earned.  If you’re studying abroad, you may want to order a pizza for your mom to make sure you retain your points. 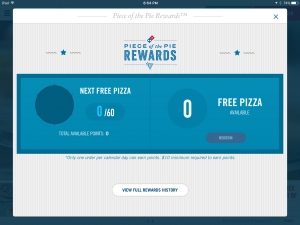