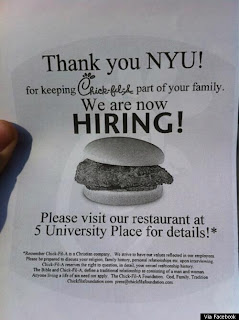 As many of you know by now, Chick-Fil-A is run by a group of Christians.  They’re closed on Sunday’s and it’s even been confirmed that they donate money to anti-homosexual organizations.  But you better believe that they don’t want you to know it.  Recently a flyer on the NYU campus, aimed at finding employees for the campus Chick-Fil-A, went viral due to the fine print at the bottom.  As you can see on the above photo, the devil is in the details. As you can imagine, this flyer recently went viral all over the webosphere, creating quite a tizzy.  But according to the Huffington Post, Chick-Fil-A has responded by saying that the flyer is a fraud.

The fine print reads: “Please be prepared to discuss your religion, family history, personal relationships etc upon interviewing,” the convincing flyer states. “Chick-Fil-A reserves the right to question, in detail, your sexual relationship history. Anyone living in sin need not apply.”

After first reading the flyer, I was pretty positive that it had to be a fake.  Values or not, no company is going to corner their market by saying that people can’t be living in “sin” if they want to work there.  While I did have to chuckle that the somewhat homophobic message is quite consistent with Chick-Fil-A’s philanthropic efforts, I was pretty positive they wouldn’t be this blunt about it.

The flyers were handed out by two people in red blazers, posing as Chick-Fil-A employees.  Recently NYU students signed a petition, brandishing over 10,000 signatures to remove this Chick-Fil-A on their campus after hearing about their anti-gay fundraising, but the university has said that they won’t remove the restaurant.  We all know why, Chick-Fil-A’s food is too good.