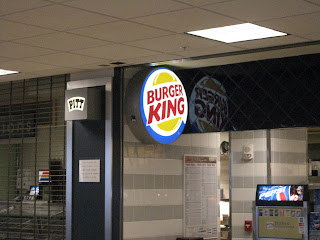 First off, this review comes via a request from Tricia repping Slippery Rock University, PA.

This is the second installment of the Classic Review series. So far I have been hearing mixed feelings on this set of reviews. Opinions have ranged from anger due to the fact that I’m not bringing anything new to the table while some other people have enjoyed seeing my take on the classics. Whatever your opinions are, feel free to leave me comments so we can get a barometer on how the people are feeling. Because of the fact that this review came by request, we’re going to keep the classic review train rolling through the station for now.

Before I begin my review of the Whopper, I just wanted to give you readers a shoutout. Despite my meager goals of getting 10 people to look at my site, we have recently attained the 200 unique hit mark. People from at least 14 different states and someone from Seoul, Korea have tuned in to get insight on fast food and hopefully to laugh. So for all of you readers, we just want to say thanks and continue tuning in, and please tell all your friends.

Now, it’s time to move on to BK. For as long as I can remember, McDonald’s and Burger King have been the titans of the fast food industry. Wendy’s has always been there, but as far as worldwide popularity and market share it has been the king and the clown going at it. As you have read before, I gave the Big Mac a solid 3.5/5. The Big Mac is an all time classic; it tastes good, but has the tendency to be a slipshod health hazard. Moving on to the Whopper, we must first take a look at where the Big Mac and Whopper differ. 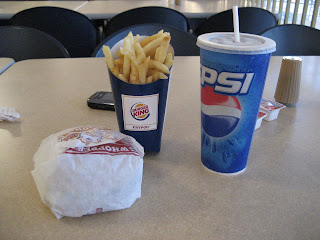 The Big Mac takes the vertical approach to burgers. With three buns, including a largely unnecessary bottom bun meandered into the middle of the sandwich; the Big Mac has some great height. In my experience, this had directly led to a surplus of sandwich meltdowns. We’ve all been there, we know the fear you get whenever you’re eating this burger. By having to use so much leverage with your hands to get a grapple, you end up squeezing too hard, and then you can’t even afford to put it down because picking it up again will only lead to heartbreak and sadness.

The Whopper takes a different look, as it goes for horizontal and/or wide approach. Sporting the diameter of a small basketball, the Whopper is much flatter than the Big Mac and a sure grip can easily be attained. Taking bites doesn’t require one to dislocate their jaw to field the 4 plus inches of height of the Big Mac either. 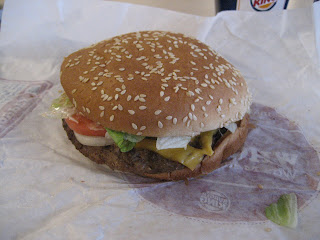 Burger King’s Whopper consists of a sesame seed bun, a flame broiled burger patty, lettuce, onions, tomatoes, pickles, mayo, and ketchup. Not sporting any cheese in its original form concerns me, for I’ve always been a fan of cheeseburgers opposed to hamburgers. So I forked over the extra $.44 to get the cheese. But that’s just my personal preference.

The Whopper truly shined during my review. I’ve always liked the taste of BK’s burgers. Supposedly they’re cooked over flames, though I’ve never witnessed anything more than heating trays in the back. Whatever it is, the burgers have always had a distinct taste that is genuine and unique. The toppings were fresh and throughout the meal I nary needed a napkin. The short and wide approach has always worked for many humans, and it works here when it comes to burgers. 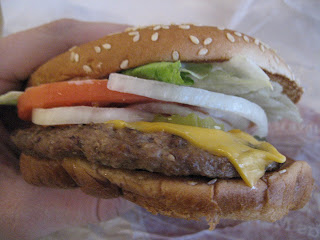 I’m going to give the Whopper a 4/5. I’m aware this might cause stirs from the McDonald’s nation, but I won’t lie about my opinions. A less sloppy and tastier treat will bag this boy every time.

As a side note, I want to make everyone aware of the fact that BK houses one of my all time favorite sauces. Entitled the “Zesty Sauce”, the sauce is a creamy horseradish-esque tapestry that accompanies the onion rings. 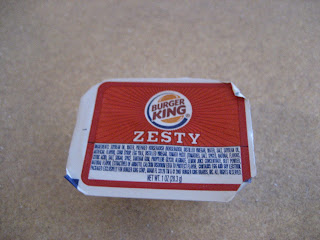 Despite this, I enjoy dipping my fries in it as well. It is in fact zesty and tangy. I really like this stuff, I even went as far as telling g and double g reader Kristy that if they bottled the stuff, I’d probably put it on my cereal”. However, I quickly rescinded the comment, based on the fact that onion ring sauce would probably damper most anyone’s Frosted Flakes. 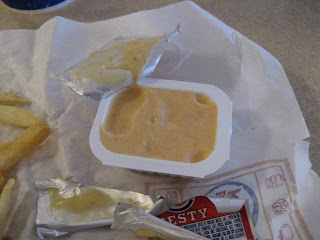 Anyways, the Whopper is tasty burger that edges out the Big Mac in my book. Go out and try some Zesty Sauce too. You won’t regret it.