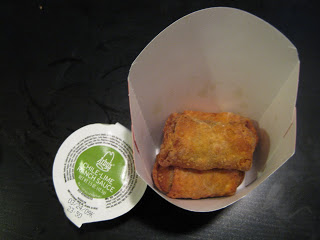 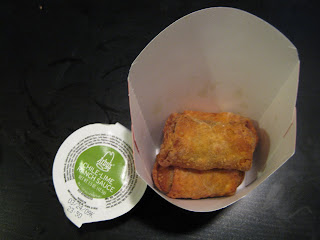 It has been quite sometime since I have joined in the reviewing and I decided to tackle Arby’s® latest gimmick, South-West Mini Egg Rolls. I usually tend to shy away from cultural combinations such as this–especially when Asian cuisine is being fused with the American South-West. Despite this, I decided to try this new creation because Arby’s® has an unusually successful track record with their side dish gimmicks (See Mac and Cheesers/Baked potato wedges).

The egg rolls are truly mini, but the amount of egg rolls provided seemed to be sufficient. I opened the large tub of sauce provided and began to dip my first egg roll. The south-west taste is derived from the “Monterey jack and cheddar cheese blend” along with the bits of corn. I couldn’t remember if these little guys were supposed to have chicken in them or not, and I had to consult the official Arby’s® website to look at the ingredients. 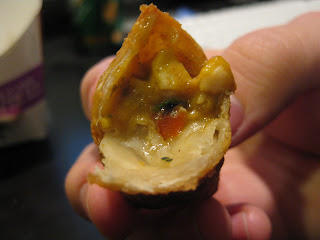 The lack of chicken really made these taste like nothing more than something you would find at a shady convenience store. The sauce bails these chicken-less rolls out and almost makes you forget that they fooled you.

The lack of chicken really detracts from the success of these egg rolls, but they still serve as a tasty addition to any Arby’s® meal.

As an additional little tidbit, We recently got wind of a new Arby’s® Gimmick coming this March called “Arby’s® Roast Burgers™” sporting the tag line “It’s the burger done better™!.” These burgers, however, do not seem like burgers at all but instead a variation of their standard roast beef on some sort of artisan kaiser roll complete with peppered bacon, cheese, lettuce, tomato and onion. We will keep you posted as details unfold.