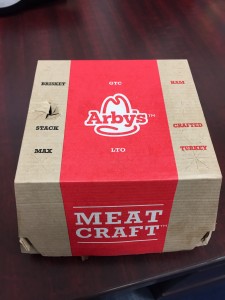 Since the dawn of time, BBQ enthusiasts and pitmasters have smoked brisket. Smoking by slow cooking, which is done in the form of indirect heat, helps to break down the connective tissues in the normally tough cut of meat. Because of this long ass process, fast food restaurants have traditionally strayed far, far away. But due to increased competition and the ever increasing desire to drive differentiation, places like Arby’s and Firehouse Subs have taken on this once hands off meat.

To make things easy, Arby’s has even provided this video to educate the consumer on why their sandwich will cost them so much:

While there’s no mention of how the meat gets from a Texas smokehouse to every single Arby’s in America, at least it makes it seem somewhat feasible that this 13 hour smoking process is legit. While the video describes the OG Brisket Sandwich from Arby’s, they have released a brand new variant, aimed at the spicy food enthusiast, know as the Jalapeno Brisket.

One of my favorite aspects on this splurge worthy sandwich, is the fact that Arby’s doesn’t mess around with vegetables unless they’re deep fried.  Every single ingredient is aimed at making a glorious, over the top item that is diverse in flavor and in note.  It should be noted that Jalapenos are fresh cut, not pickled, so their spice is only amplified.

Being a color blind individual, it’s easy to get fooled in daily life.  So whenever I saw something poking through the box, based on color, I thought it was lettuce.  Luckily, I was mistaken and this was actually meat exploding out of the box. 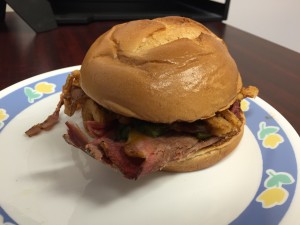 Upon initial inspection, everything was in order, we had a heaping helping of brisket, a ridiculous amount of diced up jalapenos, melted cheese, a haystack of onion strings, and the proverbial slodge of BBQ sauce, on both the top and bottom bun no less.  Diving in, I was surrounded by a world of premium taste and decadence.  The brisket meat is by far the best fast food meat out there.  Its tender, thick cut nature supplies a great bite and the flavor is truly off the charts.  Besides the meat, it should be said that this sandwich is damn spicy.  The jalapenos are ridiculously spicy and there are so many of them that every bite makes your mouth burn more.  To me that is a great thing but those who don’t like spicy food should stick to the original brisket, that’s for sure. 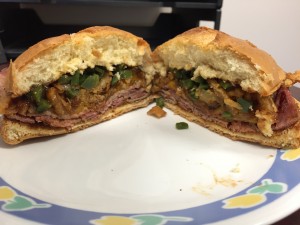 Moving forward, I was a huge fan of the remaining aspects.  Crispy onion strings are typically great, but have a tendency to have a mush factor in fast food.  These retained a crisp factor and there was an ample amount.  The double splattering of chipotle BBQ sauce was very smooth and savory, clearly having a more vibrant taste than a typical sauce.  Lastly, the bun was heavy set and thick, ready to handle all of the moisture present.

From end to end, I was extremely pleased with this sandwich.  Arby’s is putting out quality meats and flavors in the fast food realm, and it should be noted by all.  The brisket here is the true show stopper. So much flavor and juiciness that could overwhelm the average eater in a single bound.  The heat and the sweet of the peppers and sauce enveloped my world and I haven’t been the same since.  This has gone on long enough, just go get one while you can.  Oh, by the way, the sandwich alone costs $5.50.  This is premium no doubt, but well worth it, for once.