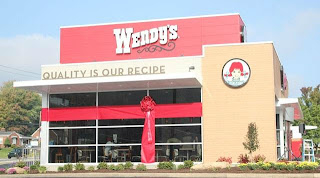 According to a report from BurgerBusiness, Wendy’s current renaissance still has some major changes planned for fundamental ingredients coming in 2012. You may have recently read our review of the new Dave’s Hot ‘n Juicy Cheeseburgers as well as remember the recent upgrade to Fresh Cut Fries with sea salt. The overhaul will continue with both menu changes and changes to the look and feel of wendy’s restaurants.

Wendy’s recently unveiled their new coffee line called Redhead Roasters Coffee and are currently test marking a slew of new fresh baked breakfast offerings. BurgerBusiness reports that changes are also expected for the Chicken patty which is being referred to as “Gold Chicken.” And there are reported plans for major design changes to the aesthetic of the restaurants.  Recently a state of the art Wendy’s opened in White Oak, PA complete with a fireplace and a soda fountain with up to 125 choices.  This may be a model for a national remodling campaign.

By the end of 2012 Wendy’s will have new fries, new burgers, new chicken, and new coffee—not to mention that breakfast as an offering in general is still relatively new. Sounds like Wendy’s is determined to bolster sales, and so far it seems to be working.

Some very exciting times are ahead!  We’ll keep you updated and be sure to provide reviews as the changes are unveiled.