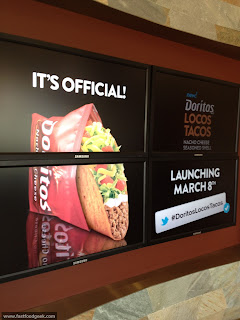 The focal point of my journey to Taco Bell HQ was the unveiling of the Doritos Locos Tacos.  I can’t remember the last time I’ve heard this much hype for a singular fast food item and from what I’ve seen and heard at Taco Bell yesterday, they’ve never had a bigger launch.

Taco Bell’s CEO, Greg Creed, announced to us yesterday that the Doritos Locos Tacos will be released to the public, nationwide on March 8th.  But this isn’t just any ordinary, run of the mill, average Joseph release. This is a midnight release.  So get your lawn chairs, grab a case of Mountain Dew, and prepare for one of the biggest events in your fast food lives.  The east coast will get the first chance to grab up these bad boys, with each time zone getting them at 12:01 AM on March 8th. Chances are, if you’re a late night munch man like myself, you might be perusing the streets in search for grub around that time anyway. 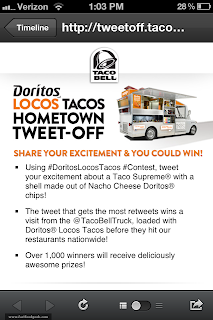 But if you can’t wait until then, Taco Bell just kicked off their first ever Tweet Off Contest.  With the winner getting a special visit from the @TacoBellTruck stock piled with Doritos Locos Tacos before the launch day, who wouldn’t want to enter?  All you have to do is sign up for Twitter, if you aren’t already, and then use the hash tag #DoritosLocosTacos and #Contest in your tweet, explaining why you and your town deserves a visit from the truck.
Believe me, your town might overthrow the current officeholder and elect you Mayor if you win this prize. Whoever in America get’s the most retweets will win the grand prize, with 2nd and 3rd place receiving $1,000 Taco Bell gift cards.  Hot dang that’s a lot of tacos.  1,000 other $5 gift cards will be handed out to entrants who participate.  Just go to tacobell.com for further details.
Be sure to follow us @FastFoodGeek if you want to help our entry into the contest.  Whenever you see the tweet: “Geeks Unite! Help bring the #DoritosLocosTacos to our town and RT this. Tell all your friends! #Contest” , retweet the crap out of it.  Hopefully we can get a big enough following to win this sucker, so all the Fast Food Geek readers can unite as one unruly Doritos Locos Tacos mounging mob.  But hurry this contest ends Monday February 20, at 11:59 est.
I’ll be back a little later with Part 3 of my journey to the Taco Bell HQ as well as the big review of the Doritos Locos Taco!
~Andrew
@atkpitt12