It seems as though Spring 2013 is truly the season of the chicken.  First Wendy’s, then McDonald’s, and now Sonic.  Redoing their buns into a newer and fancier ciabatta styling and coming out with a premium sandwich that has enough adjectives to throttle any thesaurus.  The new Premium Asiago Caesar Chicken Club Sandwich is here and you better believe it comes in grilled or crispy.  Read along to see why if you’re watching your figure, you probably shouldn’t either variety. 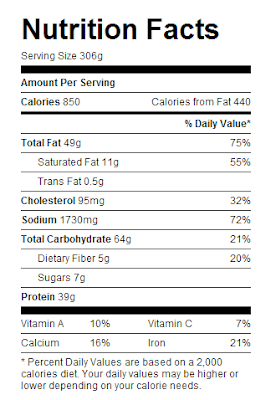 No this isn’t the Nutritional Information for a Double Bacon Angry Whopper, it’s the crispy variety of the PACCC Sandwich.  Not only does it encompass 850 calories, but we’re talking about over half of your daily value for saturated fat. But believe it or not the grilled variety isn’t much better posting over 600 calories and 30 grams of fat.  So alongside the Cinnasnack’s and the diabetic coma they might put you in, you might want to fast before trying these as well.
~Fast Food Geek