This year marks the 10th Annual Shacktoberfest celebration at Shake Shack.  Ten days of special and limited edition menu items to celebrate the Oktoberfest season.  While many big chains have one or two seasonal items, Shack Shack unleashes a full Shacktoberfest menu.

I need to provide a bit of a disclaimer before you continue.  Unfortunately, the Shacktoberfest menu is over as of October 4th.  Sadly my procrastination found me arriving at my local Shake Shack on the final day of the celebration (unknowingly) which makes this write up largely pointless.  Having said that, I still felt it was worth sharing the special menu items that were being offered and provide my thoughts on the ones I tried. 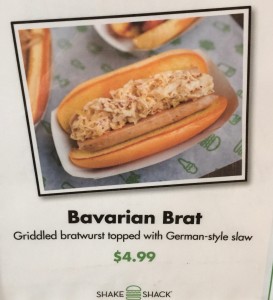 For a company that has a very small menu which hasn’t change much over years, its impressive that they go all in on the special Shacktoberfest menu.  Shake Shack has been testing their new Fried ChickenShack Chicken Sandwich for several months now… I think this is safe to roll out nationwide.  For ten days, they basically have seven new menu items to choose from.

Its true, much of the menu is clever repurposing of other items.  They have a Bacon Cheddar Brat, and then also a Bacon Cheddar Brat Burger–adding the brat on top of the standard Shake Shack patty.  Even with this ingredient shuffle, I still felt like I had a lot of options. 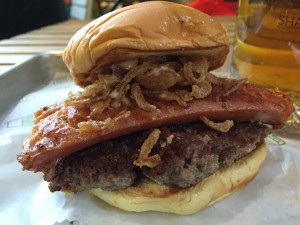 One of my favorite things is comparing the beautiful promo pics to the disaster you get in real life.  This is a pretty simple burger build, but I was really impressed with how close it looked to the picture.  The sandwich was also really filling considering it is a full bacon cheddar brat AND a burger.  Thats a good bit of protein for your 7.59 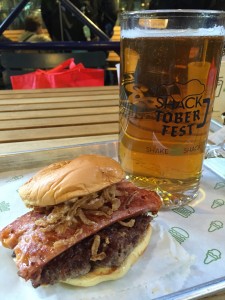 Sadly the above cost me just under $20 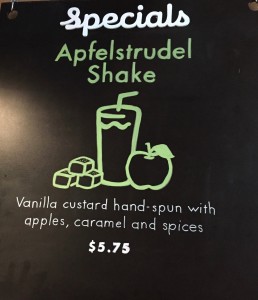 I also went back for more and took a trip to the C-line to order the special milkshake.  The Apfelstrudel Shake is Vanilla custard, apples, caramel, and spices.  I’ve had my fair share of Shake Shack shakes, and I was blown away.  I totally was not excited for this shake, but it ended up being one of the best I’ve had from Shake Shack, and I wish I could continue to order it.

As I mentioned, none of this matters until next year, as ShacktoberFest 2015 has already come to a close.  I will definitely attend next years early and often. 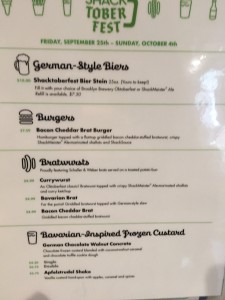 For good measure, here is the Shake Shack Custard Calendar for October: 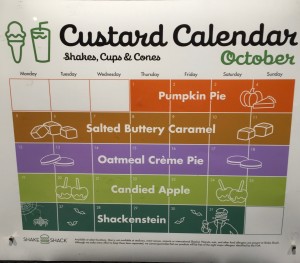