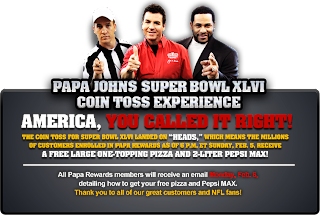 50/50 bets can be quite precarious. Just ask Papa John and his newest promotional gimmick. A couple of week’s back Father Jonathan had a poll set up on their website for America to decide what they thought the coin toss on Super Bowl Sunday would land on, heads or tails. America voted for heads and Papa John’s stated that if the coin toss during the game landed on heads, everyone who was signed up for Papa Rewards, their loyalty system for online orders, by 6:00 PM yesterday would receive a large one topping pizza and a 2 Liter of Pepsi Max for free.

I mindlessly signed up for Papa Rewards last week after reading this and practically forgot about the deal when watching the big game last night. But after the coin toss transpired, and heads landed, I logged on to the T and saw my timeline exploding with rants and ravings about free pizza from Papa. 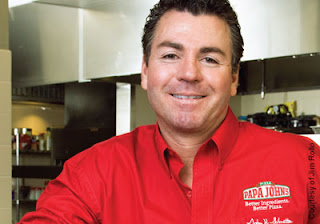 So yes, Papa John, the body bending contortionist, who always looks so awkward and hunch-backed in his commercials on that stool, will need to shell out coupons to the “millions” of people signed up, including yours truly. I love nothing more than free food, especially whenever I “won it”. 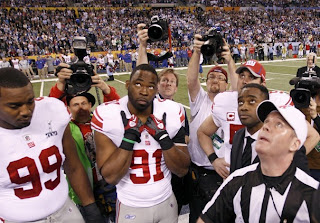 My first thought regarding Papa was whether or not they took out insurance for this gimmick. Traditionally stores or companies who make these ridiculous offers take out an insurance policy if they somehow lose them, so that they won’t go belly up. Not only did John’s offer this deal on 50/50 odds, but according to Darren Rovell’s tweet (@darrenrovell) from last night, they also took out no insurance claim. Papa John’s must have a serious stash of cash under their mattress or they just made a pretty big mistake.

Papa John’s said that they’ll be emailing the lucky winners tonight, with a coupon code for their free pizza and pop, with the offer expiring March 4th. So make sure if you won, you make Papa put his money where his mouth is and order up!