Even if it’s April Fool’s day and it’s hard to believe much of anything, we can all believe that Subway has a new featured item in this new month.  Instead of replacing the reigning Oven Roasted Chicken as the $3 six inch select, the Black Forest Ham as been added on alongside.  Now you can get either six inch sub for a pretty paltry $3.  The Bacon Egg & Cheese breakfast sandwich now comes in for $5 all month long. 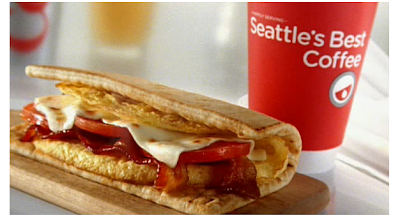 The Bacon Egg and Cheese footlong isn’t exactly the healthiest way to start off your breakfast encompassing 820 calories and 32 grams of fat.  The Black Forest Ham six inch is a lot leaner options only having 290 calories and 4.5 grams of fat.  Like we said last month, if you’re watching your figure it’s a lot smarter to go with a six inch at subway because the footlongs are typically worse than a fast food burger calorie wise.
~Fast Food Geek