Since we’ve been gone, a lot of things have changed, but one thing stays true, Subway is still pumping out “new” monthly gimmick sandwiches that aren’t really new.  This sandwich debuted back in June of 2009, but Subway’s hoping that their target market isn’t coherent enough to remember that far into the past.
While I admit, if  you ask the average person walking down the boulevard if they remember this Tuscan two stepper I’d be willing to bet they wouldn’t have a clue.  But regardless, I remember it like the back of my eye lids.  Regardless, it’s still being pushed for a couple more days as Subway’s featured $6 footlong for October.  As you may remember, we’re not the biggest fans of Subway, but due to it’s pricing and reasonable health factor, find ourselves going here all the time.
The tastes of Tuscana are influenced by a seemingly herbified chicken as well as balsamic vinaigrette.  Remember Subway doesn’t have to do much to change or alter their sandwiches and create a gimmick.  Sprinkle some spices here, dash a couple of oils there and you have a brand new sub.  Enough to fool the general public though.  But this sandwich is also considered an 8 grams of fat per 6 inch “melt” which means cheese is included in the nutrition facts, something most people don’t even realize whenever they eat their “healthy” subs, because we all know everyone gets cheese on their sub whether it’s advertised as well. 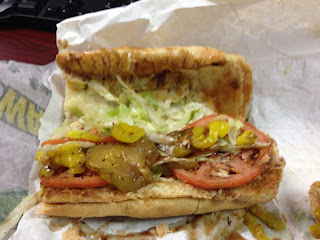 Subway subs photograph worse than Justin Bieber’s random tattoos.  The photography for Subway ads should win an Emmy.  Subs are fluffed out and puffed out with every single fragment of meat bulging out of the sub like it’s packed to the gills.  Every shred of lettuce has been manicured to the finest detail.  But once you unravel your sleeve in the comfort of your own chair, you get this: smushed, pushed, and pulverized.  If you look closely you might be able to see some chicken and a smudge of cheese.  One thing you can definitely see is the bath tub full of balsamic saturated throughout.
Overall, taste was decent for a Subway chicken sandwich.  The Tuscan spice was somewhat mild but still provided a general zest that fragmented itself from the regular chicken breast.  The balsamic was rather weak and really didn’t have that strong of a flavor.  Disappointing that a gallon of dressing can’t provide a flavor that worth remembering.  The Tuscan Chicken Melt gets a 2/5 star review.
Tuscan Chicken Melt: 2/5
Until the next sauce,
Fast Food Geeks