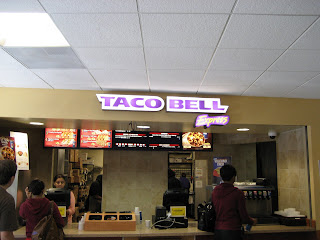 Well here it is, the inaugural review for Goodies and Gimmicks Galore. I hope that its something to behold.

Taco Bell runs an interesting kind of business. They are fast food, yet they are often held in high regard by me in this department. This is mainly for the fact that almost every single one of their menu items stems from old, failed, and misguided promotional items. Or Gimmick Food. From the crunch-wrap supreme, to the chalupa, to the grilled “stuft” burrito, Taco Bell loves combining new things, so many times that it might just seem original. They combine America’s flair for fat by adding cheese, special sauces, extra breading and shells, and then deep frying the whole ordeal. Its become such a joke that even SNL parodied TB with their “Taco Town” sketch. So for these and many other reasons, I found myself walking into the University of Pittsburgh’s Taco Bell Express to get my hand on Taco Bell’s newest creation the Triple Steak Burrito.

While the prices at this particular Taco Bell might be inflated due to the fact that it can be added on as part of student’s meal plan, I decided to attack the 5.99 combo price regardless, even though all I got extra was a medium fountain drink. The waitstaff was awkwardly accommodating and I received my order promptly, which is radical change of pace for this particular TB.

All I know is that whenever I received my to go bag, I immediately felt a strange heftiness that I have not experienced before at the Bell. Maybe the burrito was indeed Triple Steak’d. Upon further review, the foil wrapper was indeed quite large. 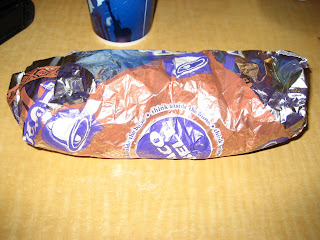 And the sucker looked even larger once it was released from its warming cell. 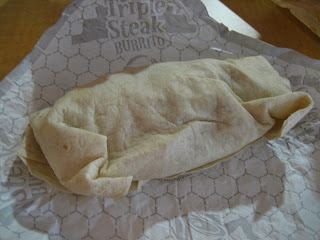 Word on the street was that the burrito contained steak and lots of it. There was supposed to be supple amounts of rice, shredded cheddar cheese, and some sour cream sauce. My first bite was a bit of a thrilling experience, I got a whole lot steak in my mouth, but little else. The problems with most burritos these days is the employees who make them. All too often you will find that your burrito is mismanaged and quite unproportioned inside. A whole mouthful of rice, loads of sour cream in the middle and nowhere else, meat only on one side, the list goes on and on. I can’t complain too much, considering we’re talking about a taco bell here, not even one thats free standing either. Anyway the “carne asada” inside was actually pretty tasty. It didn’t just take like meat but something with a distinctive flair. Upon further review, there was a good bit of rice inside but the meat wasn’t lacking either. 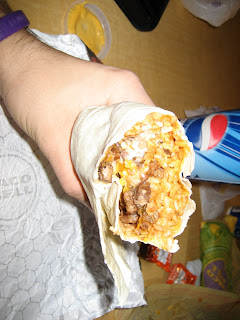 My accomplice (and fellow contributing writer to g&gg) Mike indicated to me that his regular bean burrito was quite puny in comparison. It does indeed seem Taco Bell is trying to make America fatter once again. This time there are no schemes or tricks such as an extra taco shell or special calorie rich sauces, its just a simple addage of meat.

So i finished the rest of burrito without too much flair. The sour cream was indeed loaded in one particular area, and the shredded cheese was sorely lacking, but in the end the burrito left me quite filled and satisfied.

As always I must let the food settle for a little and sit before I can conclude any review, because food is only as good as it digests. Taco Bell has led me astray in this department before, but I have to say I felt normal and didn’t experience that lead belly feeling or the “I just ate fast food headache feeling”.

So in the end I must give the Triple Steak Burrito a 3.5/5 star rating. It had a lot of tasty meat in it, but the burrito was overall rather normal. No special sauce (only sour cream) and no spicy factor (which I have come to expect from TB) led to the 1.5 star reduction.

So there it is. The first review is in the books. If you liked this, you’ll be loving the continual updates as I continue to journalize my experiences with goodies and gimmicks galore.

Mike might be back a little later for a mini review on the Volcano Taco as well.