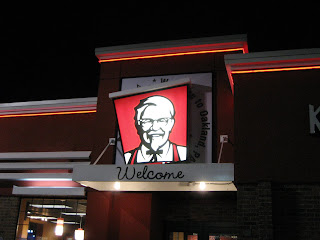 Going into this review, I had the unfortunate experience of reading the nutritional information regarding the KFC Fully Loaded Big Box. With an estimated 1600 calories, the meal shouldn’t be legal to sell without a permit. But because of my duties to bring the truth to the people I fasted for the first half of the day so that I could take on the big box without perishing later. Well this was the plan atleast. 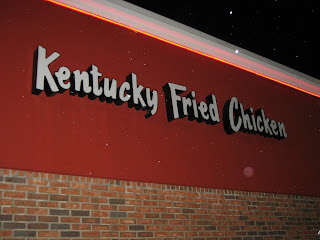 The Big Box has been around for years and is just another example of why America is fat. I remember a few years back a high school friend was entertaining a foreign exchange student for the summer during the period when the KFC Snacker was being introduced. In a matter of a few months, the kid from Europe had gained a hefty twenty pounds. Just goes to show you that the Colonel is still trying to kill you from beyond the grave. 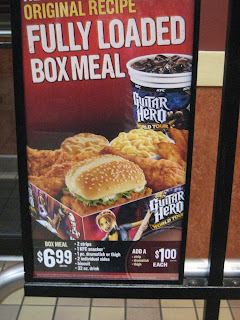 The Fully Loaded Box Meal, is the pretty much the same as the original Big Box meal, except that it adds a KFC Snacker instead of Popcorn Chicken. KFC is the kind of place that I feel should just be barely hanging on. Their food is traditionally sloppy. When I was younger, my family had ordered a bucket of chicken that included a fried chicken beak and a complete piece of batter with no chicken encased whatsoever. I feel as though that I’m doing KFC a favor when I eat there but for whatever reason the place is always crowded. And another tradition is the fact that the employees are never organized, not suited to handle a rush, and never get anything right.

So walking into KFC, I was ready for Slopfest ’08. I certainly did not leave disappointed.

While in the line, I was the beneficiary of one of the largest sideswipes humanly possible. Being cut in line, blatantly in fact, at KFC. Its one thing to feel slighted, but its just depressing whenever something like this happens in such an establishment. Its like being stranded at a rest stop in South Dakota without any pants. Things just can’t get much worse.

So I eventually get waited on, and I order the fully loaded big box. This is quite the complex order because there are variables a plenty. First off we have the snacker. There are many varieties including, buffalo, nacho cheese, fish, and barbeque. But I felt like it was the right thing to go with the original. Then there’s the two options for sides. KFC has the largest bamboozle of sides this side of the Cape of Good Hope. The sides include baked beans, corn on the cob, potato wedges, mashed potatoes, mac and cheese, cole slaw, green beans, corn niblets, and rice. I was completely caught off guard during the exchange and I ended up ordering the cheese paste and the potato wedges. Lastly I was asked whether I wanted a leg or a thigh of the original recipe chicken. Upon choosing the leg, I was told that they were out of legs. Upon saying that a thigh would be fine I was told that they were out of thighs as well. Hmmm, something seems off whenever I was given two possible options and they were both gone. All very typical KFC. So I ended up getting an Extra Crispy drumstick. The meal is topped off with two Original Recipe strips and a 32 oz beverage. I attempted to save my life by getting Diet Pepsi whenever I was met with a sign reading “The Diet Pepsi are out”. Keeping in mind that there was only one Diet Pepsi spicket you’ll have an idea of what kind of intellect I was dealing with. 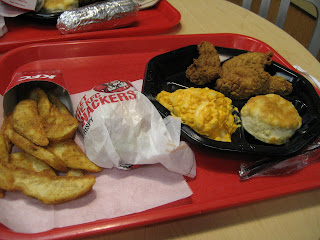 As you can see, to my bitter disappointment, this was not a big box meal at all. This was a Big Tray Box Meal. How can you be selling a promotional item and not even attempt to recreate the product advertised. I mean, its the name of the meal. The least you can do is attempt to give me a box.

So I started to eat individual items. First off was the KFC Snacker. 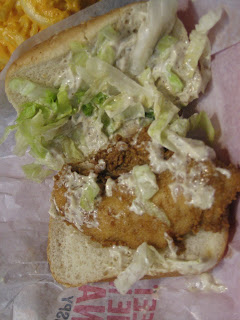 What you see here is the artist formerly known as a sandwich. Upon opening the wrapper, the sandwich just came undone. Its hard to even see where the sandwich starts and ends. But I made due and ate the sandwich as best as I could. The KFC Snacker is simple, its just a bun with lettuce and mayo. It was probably the highlight of my meal. Which is saying something after you take a look at that picture.

Next I decided to take on the sides. 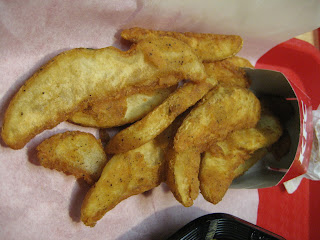 The Potato Wedges looked pretty good. But unfortunately they were limp beyond belief. There was an extreme sog factor that could only be compared to a flooded public restroom. You just don’t want your potatoes to be that mushy. 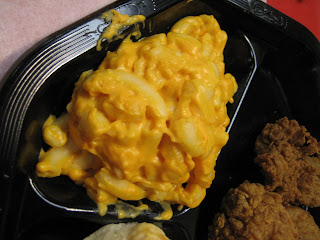 I don’t know what planet these came from, but I’ve never seen mac and cheese before that didn’t stay mixed together. As you can see, the cheese is almost afraid of the noodles. I actually ate some whole noodles that were naked of cheese, as the pasty cheese concoction flaked off like a Head and Shoulders commercial. I could literally feel this muddled mess destroying my intestines as I ate it. 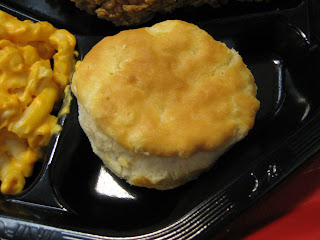 The KFC Biscuit is a classic. Warm, buttery, flaky. Nothing could go wrong with it and nothing did. They finally got something moderately right. 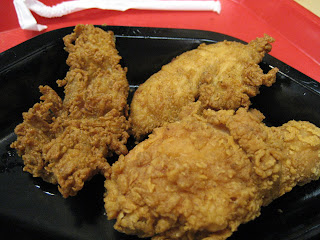 Lastly we’ll head to the chicken. The Original Recipe strips should be renamed to nuggets. Greasy, puny, and rather uninspired. The colonel’s original recipe was truly lost in translation. Last but not least, we had the Extra Crispy drumstick. This was in definitely in the top four worst things I have ever eaten. I took my first bite and it felt like I bit into a swamp. There was so much grease waiting for me inside that there was a palpable drip of death onto my tray. 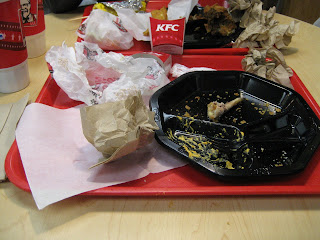 Thats the carnage that was left. Little did I know that this looks peaceful and serene compared to what was happening to my body. It wasn’t long before I felt awful. It wasn’t even as if I had a stomachache as much as I had a full body ache. My legs weren’t circulating blood correctly and I began having what seemed like blurred vision. Eating food should not do this to you. I don’t know what KFC does with their food but radioactivity and nuclear fusion quite possibly are two of the 13 herbs and spices in the Colonel’s Original Recipe.

I have to give the Fully Loaded Big Box a 1.5/5. The worst rating in g&gg’s history. I didn’t eat anything for the next fifteen hours and I contemplated never eating again. Like I said before, food, fast food or not, should not do this to you. 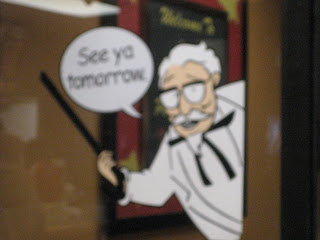 To top it all off, as I left KFC I was bombarded with audacity and cockiness. KFC literally has a sign that says “See ya tomorrow”. How can KFC even expect anyone to make multiple trips to their establishment in the course of a month, let alone tomorrow.

So if you want to drink grease, burn up your intestines, clog your arteries, and lose three and half months off of your life, by all means go out and get the Fully Loaded Big Box Meal.