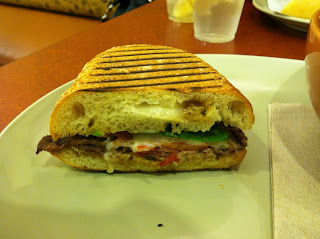 Panera Bread is the king of “upscale” fast food. So above the notion of fast food that it commanded a whole new sub genre: Fast Casual. It operates under the pretense of being a fresh, healthy, neighborhood café insisting that it is still a bakery first and a restaurant second. The monthly promo item still surfaces, with minimal fanfare, and sometimes these make it to the full time menu. The new Steak Balsamico is the newest promo and it appears it has gone straight to full time status, but does this new sandwich deserve to rub elbows with the likes of “Turkey Bacon Bravo” and the “Frontega Chicken?” Read more to find out!

The sandwich is composed of the following ingredients: Seared top sirloin, mozzarella, roasted red peppers, fresh baby spinach, tomato & basil balsamic spread on ciabatta. All of these things in theory make for a classy sandwich more sophisticated than cars that park themselves; so sophisticated that it costs about as much as cars that park themselves. Panera typically assigns their “upscale” offering the “signature” designation which magically adds $2 to everything. Someone at Panera HQ came up with the genius idea of adding another superlative, thus creating an entirely new menu section “Premium Signature” throwing the price of these sandwiches into the stratosphere—this section is where you will find the Steak Balsamico. The sandwich may be trying to earn its heavy price tag from these dramatic grill makes alone: 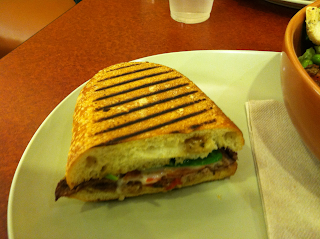 I got my sandwich and I couldn’t help but notice that the profile looked to be about 90:10 bread to contents ratio. I took my first bite and my suspicions were confirmed, lots of fluff and not much stuff. It’s a shame because the stuff that was there actually tasted great. I really enjoyed the taste of the “seared top sirloin,” peppery but not too peppery and the remaining toppings supported the steak really nicely. I was actually impressed that Panera managed to combine flavors so well. But at the end of the day, it’s hard to look past the razor thin slices of steak when you’re paying almost $9 for just a sandwich alone. I wouldn’t dream of venturing into the double meat territory, I’d have to defer my student loans before I could afford such a luxury. Maybe I would consider paying the ultra super premium price if Panera didn’t also require me to practically do my own dishes when I’m done with my meal.

This sandwich earns a lower rating for the lack of substance alone. It could have been a winner but instead it falls in the “only with a coupon” category.  Maybe Panera can use the profits from this sandwich to revamp their embarrassing website–by far the worst of any major chain restaurant I’ve ever seen. 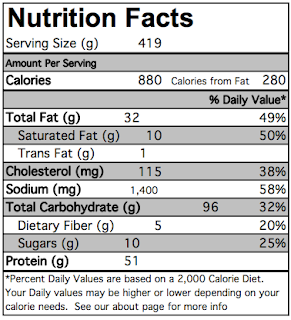