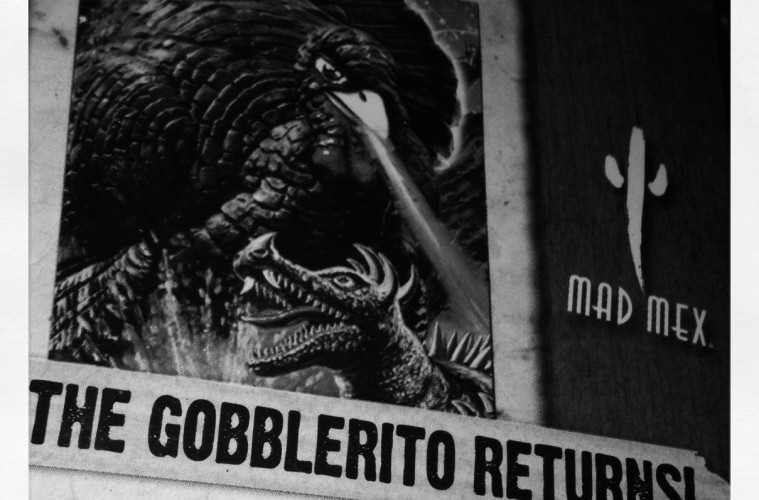 While the Fast Food Geek idea had just been birthed, I thought to myself, “why don’t we start here and now?” So I did, snapped some photos of the gimmick currently on my plate, and allowed the wheels to start turning…
Thus the Gobblerito review is here. Mad Mex is a regional Mexican food joint in PA and Ohio, known mostly for their huge margaritas (Big Azz) and slightly over priced Mexican food. But one item that catches our attention every year is the seasonal release of the Gobblerito. From late October through Thanskgiving, this genre defying culinary concoction exists. Mad Mex releases it to the masses like a crazed exotic farm owner releasing his zoo into the wild. It basically takes the idea of taking a whole Thanksgiving meal, and stuffing it in tortilla. We’re talking homestyle stuffing, mashed taters, corn, and turkey, cooked to simmering perfection and then encapsulated by their traditional burrito shell. All of this is then lathered in gravy and served with a side of cranberry sauce. It’s like the holiday feast, without your entire kitchen looking like a warzone. The annual Gobblerito feast started in college and now continues on a yearly basis for us, like a pilgrimage to India to find a higher meaning to life, we flock to Mad Mex so we can loosen our belts and engorge our pallets.

As you can see, aside from the gravy coating, this looks like any normal burrito treat. But like much of Mexican food’s answer to the food sleeping bag, the beauty of this behemoth beast comes from within. Typically with Mad Mex’s burrito’s, they aren’t eaten like a traditional Qdoba or Chipotle burrito, in the hands. This is a fork and knife ordeal for sure. Honestly, this is a lot better of an approach for burrito tasting than the old fashioned hand hold. More of the treat ends up in your mouth not like when pinto beans usually end up in my shirt pockets, and I find myself flabbergasted later why animals are searching my shirt for scraps.

As you can see from this cross section, everything is placed together in kind of a mish mash pot luck. No one ever said this was an artisan feast, it’s supposed to be a shitshow slopfest in there. But that’s what makes this treat so unique. We’ve all had all of stuff on our plate at the same time for the end of November feast, but despite all of my efforts, it’s hard to get all of these things in my mouth on the same bite, in sandwich form no less. The sheer brilliance of a turkey burrito blows my mind more than KFC selling grilled chicken, but where the Gobblerito truly shines is the great taste and quality of the actual ingredients. I mean, any half drunk slob can walk into the kitchen and try to make thanksgiving dinner. It might end up tasting like a steel toed boot, but most people can throw together stove top, instant mashed potatoes, canned corn, and a pre cooked turkey breast and serve it up. But it takes a little bit of Don Juan to satisfy all the relatives. That came off dirtier than expected, but as we were…

The Gobbledogg is packed with a flavorful wave of homestyle taste. A taste sensation if you will. Turkey is tender, corn is crisp and buttery, the stuffing is light and fluffy, and the mashed potatoes legit taste like idaho’s own. Topped with gravy greasier than your pubescent brother’s forehead and we’re talking about a gobblin’ good time. It might be hard for the novice stomach to tackle, but if you pace yourself just right, you’ll be able to drive home before you fall into your food coma.

I’m gonna start off by giving the Mad Mex Gobblerito 4/5 stars. FFG is gonna be stingy with our scores…so don’t sleep on this 4 rating. Its gonna take Ronald McDonald to personally feed us to get a 5. So there it is, if you’re in this part of the world; take on this turkey train of pain. It’ll leave you in a blurry half paralysis state. And I mean that in a good way.