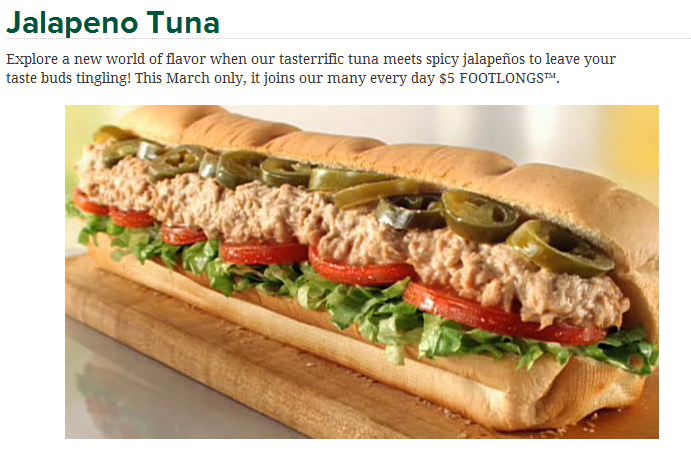 FebruANY ended yesterday at Subway with footlong prices skyrocketing back up to their original prices.  At least everyone got a free cookie yesterday in honor of the price change.  March is here and Subway is hoping to fatten everyone for the kill with their five “new” featured subs.  None of them are really something you couldn’t have ordered yesterday but Subway apparently believes that most of its customers aren’t creative enough to concoct sandwiches on their own.  So in comes this month’s $5 Featured Footlong; the Jalapeno Tuna and the Italian Collection featuring four recycled subs, including the Chicken Pizziola, Chicken Parmesan, Meatball Pepperoni, and the Italian BMT.

Back in the day, we actually reviewed the Chicken Pizzioloa, which includes the chunked chicken, pepperoni, marinara, and Parm cheese.  It’s a pretty decent sandwich, although some chewy and misshapen chicken ruined our review.

The Chicken Parmesan sandwich is seemingly new, but is pretty much a rebranded version of the Chicken Marinara Melt that I tried a few months back.  It seems as though that this sandwich features the “oven fried” chicken thus making it Chicken Parm, requiring a brand new, very similar name.

A couple of years ago, Subway decided that not enough people were eating pepperoni, so they decided to start an ad campaign touting it as the new Bacon.  As many of us found, out nothing can replace bacon and the campaign flamed out like Whitney Houston’s career.  The Meatball Pepperoni Melt was the most popular of these subs, so it makes a triumphant return to B rated, celebrity stardom.

The last of the Italian Collection is one of Subway’s oldest favorites; the Italian BMT.  I wondered for year’s what BMT stood for, so I quizzed my Subway proprietor and he responded with  “Biggest, Meatiest, Tastiest”.  The sub features salami, pepperoni, and ham.  It’s packed with big meat, making it tasty.  Quite the name indeed.

The featured Footlong this month belongs to the Lenten crowd with the fishy Jalapeno Tuna.  Trying to establish some sort of street cred with the spicy Jalapeno peppers, this sandwich is nothing more than the regular sub with the Jalaps added on, something that anyone could have done yesterday.  The .50 cent price reduction will help sales though.

There you have it, Subways 5 “new” subs for March.  All of them are quite unhealthy, with each of them having over 15 grams of fat in just the 6 inch variety.  If you want to really feel decadent, go for the footlong Meatball Pepperoni and ingest all 1200 calories and 58 grams of fat along with it.