The chain, born in the early 80s in Denver, CO, revolutionized the submarine sandwich sector of franchised fast food through the novel notion that sandwiches taste better when toasted in a pizza oven. Unfortunately, this idea is nothing new (as any Italian cook worth his salt could tell you), and is also easily replicated. Take, for instance, the compact ovens used by Subway ever since the Quizno’s emerged as its rival. While nowhere near as impressive as the rolling, assembly-line esque contraption used by Quizno’s, the microwave-esque device nonetheless delivers all the same benefits. And when said fancy toaster oven is your primary justification for selling your product at premium rates, you tend to run into problems. 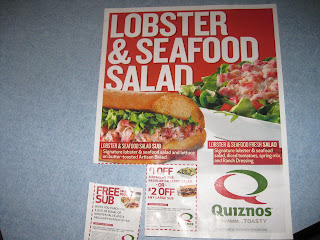 The Quizno’s Lobster & Seafood Salad Club sandwich is not a completely new menu item. It may, however, be a good thing that I was not yet a reviewer for this website when the sandwich first launched a year ago along with the website http://www.loneliestlobster.com/. Seemingly a failed attempt at viral marketing, this campaign attempts to humanize four lobsters being returned by Quizno’s to Cape Cod by making them reality webcam stars, topped off with a five minute documentary that strives to be the Homeward Bound of marine crustaceans. Although I’m as guilty as the next person to being momentarily enthralled by the hostages in the aquarium every time I go to Red Lobster, I seriously can’t picture myself growing attached to the lil’ red guys enough to hold, say, a daily webcam vigil of their whereabouts. And if I did fall in love with them, I sure wouldn’t want to be eating their kinsfolk. After all, lobsters are very sensitive creatures:

This year’s Lent-coinciding ad campaign strives to keep it simple, with a pirate voice, treasure map, and swooping camera pans:
Unfortunately for Quizno’s, the devil is once again in the details. Specifically, the fine print reading “51% Lobster.”

To research for this article, I journeyed to one of the dwindling number of Quizno’s left in the city of Pittsburgh. Located between two major universities, this restaurant was unoccipied by anyone when I arrived save for the employees. The resident sandwich artisans pounced upon newcomers in much the same way a starving lion flails for fresh prey. This, all while singing in beautiful harmony with the Top 40 radio station they were blasting inside! 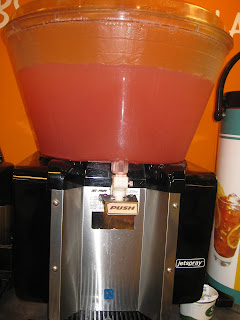 The sandwich was ordered, plain on artisan wheat bread, and I eagerly filled my cup with fresh-squeezed pink lemonade, a tart treat which is a very underrated aspect of the Quizno’s experience. The sandwich came served on the restaurant’s signature Q-shaped trays, and I got to work. 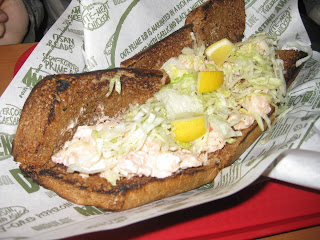 The sandwich was served with three tiny wedges of lemon resting on top to add some zing. This was a welcome flavor, but I wondered if the garnishes would be as obvious when the sandwiches were wrapped and bagged for to-go customers. The thought of getting an unexpected mouthful of lemon rind in the middle of this sandwich seemed catastrophic. 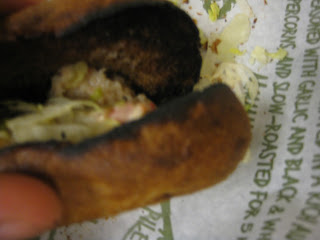 The bread was a little burned, but I actually appreciated the warmth and texture of the crustier parts. Artisan bread indeed. 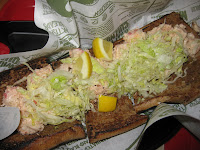 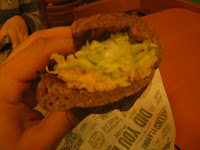 My companion picked up immediately on the fact that the lobster we had been served wasn’t 100% genuine, a fact that I only found out a few days later. This isn’t altogether that surprising, seeing as the sandwich would likely have been pushed up into the Red Lobster price range if it was. My confusion rested solely on the matter of WHAT exactly the remaining 49% was. An educated guess would say it was whitefish or something of the sort…but if that’s the case, why make it so difficult for your customers to know? 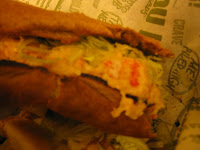 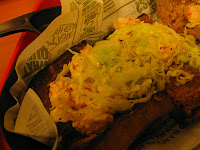 My only additional comment would be that it was a tad dry, as the 51% lobster seafood salad wasn’t quite wet enough to counterbalance the lettuce. Perhaps a salad dressing would benefit it? It’s hard to tell. 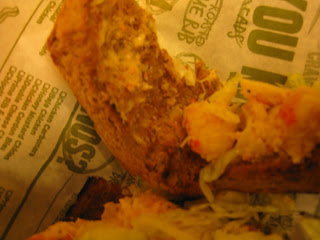 A large-sized order was completely filling for both my companion and I.

In the end, I give the sandwich 2.5 stars. While I have my reservations, the sandwich did a good job of approximating one of the famed Maine lobster roll for the mass market. It cost around $10 along with a small drink (did I mention I love their pink lemonade?), a number which only pales when compared to the multitudes of fish fries being held in town around it and the deep-battered Lenten delicacy being sold there for considerably less. 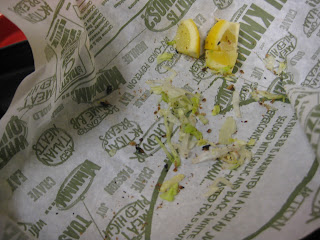 It could be worse, though. Much worse. 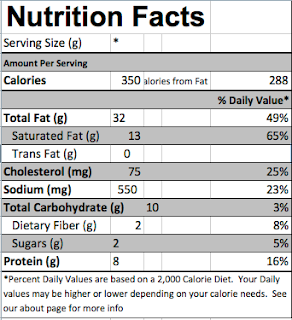 **At the time of publishing, we had not heard back from Quizno’s regarding a full ingredient breakdown of the Lobster & Seafood Salad.