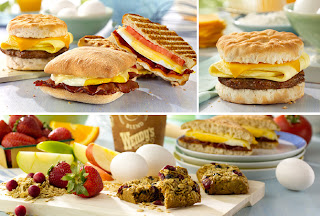 A while back, I took a look at some of the new breakfast pastry items that Wendy’s will be rolling out in the great US of A in the coming months.  With some items being sloppier than a whorehouse at low tide (Cinna-Middles), and others being borderline at best (Cinnamon Crumb Muffin), it was time to take a look at one of the more classic breakfast sandwich options.

The bacon, egg, and chee breakfast combination has been around since the stone age, with a mix of proteins, fats, and enough cholesterol to disembowel a dolphin, it satisfies the basic needs for sustenance, pleasure, and guilt all riddled together in a neat and friendly package.  Surround these items, with a bagel, doughnut’s slightly slimmer 2nd cousin, and you conceivably have a fine tasting sandwich.  One problem: Wendy’s bagel’s are soggier than a lunch lady’s arm pits after Sloppy Joe Thursday.

After removing the bagel from its vacuum seal, I was under the impression that the sandwich had promise.  It had the look and feel of a real bagel sandwich, but little did I know that what I was about to eat, was from outside space. 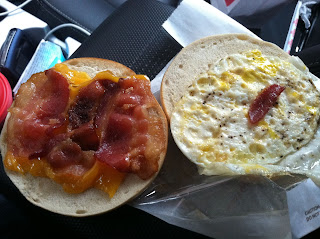 Biting into the spongey bagel was like sinking your teeth into a moist dish rag.  There’s nothing worse than a luke warm untoasted bagel sandwich.  I’m beginning to believe that this bagel was orchestrated some time ago, maybe during the Nixon administration, most likely by a team of scientists. 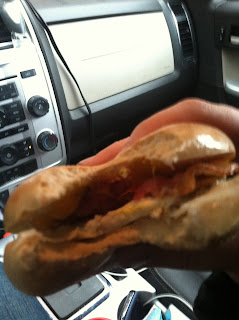 All of the wondrous flavors created by the bacon, egg, and cheese were heavily masked and sucked away by the spongey carbo log that entrenched it.  The apple wood smoked bacon, though appearing to be crispy and succulent, was washed away in a cesspool of tattered hopes and broken dreams.  The bagel was half toasted, half microwaved, and half rinsed in soap.

Softer than wet taffy during a monsoon in July, Wendy’s bagels need a dire makeover.  A bagel this gummy, needs tagged, bagged, and red flagged.  Wake me up whenever Wendy’s gets its breakfast act together.