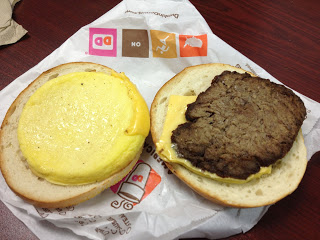 Dunkin’ Donuts has been on a roll recently.  Coming off of their triumphant Deli Sandwiches, that I continue to get for lunch on a regular basis, Dunkin’ has released what they hope will be a premium style breakfast sandwich that will knock people’s slacks off.  The Angus Steak and Egg sandwich has arrived and if you didn’t know, shame on you for six weeks.  Dunkin’ has been pumping out commercials for this bad boy on the tv and radio at a volatile rate.

Being the breakfast sandwich bandit that I pride myself in being, I had to step into the realm of Angus.  Many people have been touting Angus beef at quick stop restaurants recently as steak.  While it certainly isn’t a NY Strip, I’ve come to the deduction that Angus beef certainly cross pollinates itself into the area of semi premium beef.  Angus just also happens to be the name of my favorite current child actor turned bad ass, Angus T. Jones, of Two and a Half Men fame.

So hoping to achieve a tremendous morning like the commercial promises, I went to my local Dunkin’ Donuts and wrangled up myself an Angus Steak and Egg sandwich.  The first thing I noticed after I unsheathed the wrapper out of my paper bag was the sheer girth of what lay before me.  It felt and weighed something like two metric tons, at least appearing that I was going to be eating a colossal amount of feed.

Unfortunately for me, this was all bagel and no beef, with the Angus patty looking quite minuscule compared to the bodacious bagel. The egg and cheese seemed to fit the bagel rather nicely but I’m pretty sure someone forgot to tell the other half of the beef that it was late for its 8:30.  Of course the ads make it seem that the beef would cover the full circumference of the onion bagel, so I’m not quite sure if this bagel was just amplified or my cattle forgot to eat its feed.

Biting down, I couldn’t help but be pleased.  The bagel was the perfect blend of warm, toasty, and soft.  There’s nothing worse than a flaccid or overly stiff bagel, but Dunkin’s toaster found the perfect range of consistency.  The egg and cheese provided a consistent approach that was never put into question, while the beef is where this sandwich truly stands out.  While I wish there was a full bagel’s worth, I was greatly impressed with the truly steak-like taste that I was presented with.

With a diverse and spontaneous texture, bold and smokey flavor, I was truly in semi premium beef paradise.  I counted at least three bites that were beefless however, dropping this sandwich down to a 3 star rating.  Beef this young gun all the way and it would have reached the stars. 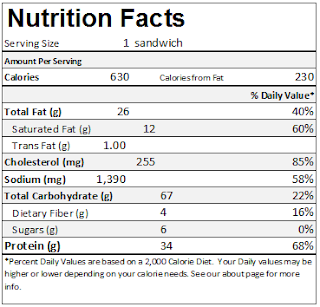