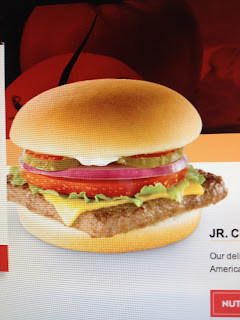 As we all know Wendy’s has been revitalizing everything from their burgers to their toilet paper recently.  What a lot of people haven’t realized is just how expensive Wendy’s is getting.  If you want to get a Hot and Juicy combo for instance, we’re talking about spending upwards of $7 to $8 if you get anything other than a single pattied burger or small fries.  For most people, that’s almost always too much for the honest Aaron to spend on a fast food drive thru meal. 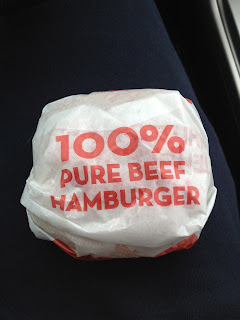 Wendy’s is selling the W meal for around $5, but what about those people really scrounging for money?  There’s always the classic dollar menu.  And to make it seem like they still give a crap about minimum wage workers, they’ve added a new and improved Jr. Cheeseburger Deluxe burger for just .99 cents.  A now with 25% more beef tag line has been added, so it must be pretty damn beefy right? Well I rambled over to Wendy’s to find out. 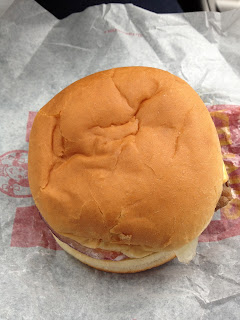 Heading into the experience I was already skeptical about the size of the burger.  The commercials made it seem like a 15 yr old girl could fit this “deluxe” burger into the palm of her hand.  This isn’t exactly screaming monstrous or meaty. 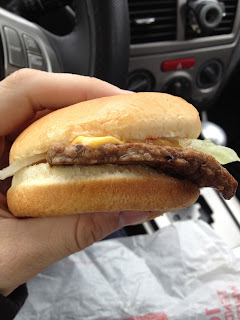 As you can see, my suspicions were confirmed.  Just like the time, I stuck my finger into my car’s electrical socket to see if it really did shock the shit out of me, I learned the hard way: value burgers equal puny and poopy. 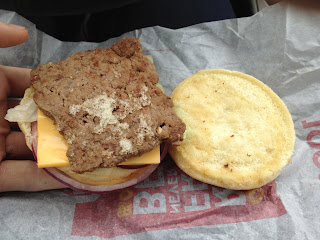 There was plenty wrong with this dollar downfall.  The patty was first off, off kilter at best.  I understand that its a square patty on a round bun, but it still shouldn’t be that hard to at least center the patty on to the cheese.  The name of this burger is actually quite a misnomer.  I should have known that something with the words Jr. and Deluxe together, there would be a load of trouble. 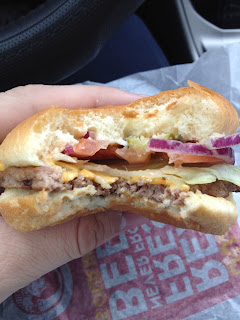 I’m guessing deluxe comes from the assortment of toppings present.  Limp lettuce, one half inch diameter tomato, two pickles, and loosey goosey red onions can’t save this burger from its paltry patty.  It is razor thin.  I’ve seen cardboard cutouts with more width than this.  I shudder to think what the original one looked like, if this one is supposedly beefier.  Honestly, what consumer could actually check on this? Is anyone really gonna get out the metric meat scale and multiply by .25 and round the 4 to determine if this one is actually bigger? I didn’t think so.
Finished this thing in three bites. The toppings salvage this burger into a 1.5 rating.
1.5/5
~Andrew
@atkpitt12
Jr. Cheeseburger Deluxe: 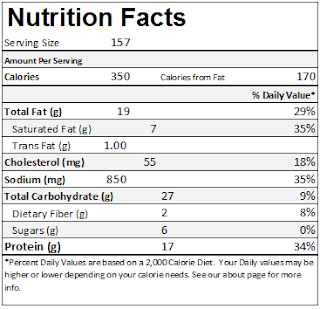