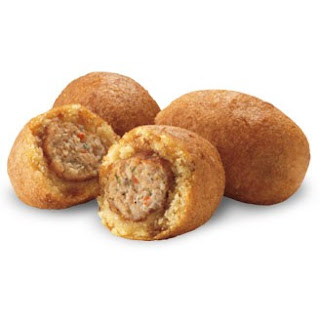 Everyone wishes that portable breakfast was a realistic possibility. The idea of eating oatmeal, a bowl of cereal, flapjacks and sausage during a car ride, has long ago been dismissed as impossible after it became socially unacceptable to have giant syrup stains on your business trousers. But Dunkin’ Donuts is trying to change that by making the All American Sunday Morning at Mom’s house breakfast of pancakes, maple syrup, and sausage links a to-go option, with their Sausage Pancake Bites. 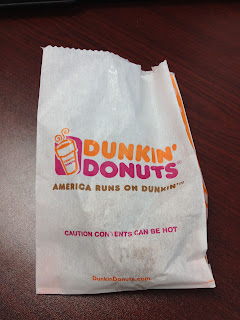 The idea is to take part of a sausage link, encompass it with pancake batter, throw in some maple syzzurp flavoring, and deep fry the crap out of it until it becomes a grabbable snack. Think breakfast corn dogs and you’re right there. The idea of grabbability goes back to the college days whenever students need to eat something while walking to class without getting slop stains all over their new Banana Republic polo. The ability to do this without getting corrugated bran puff bars for breakfast will rejoice over such an option. 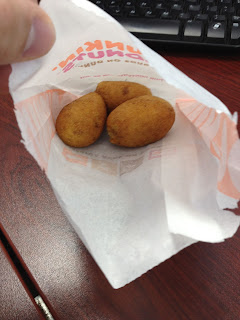 After purchasing a satchel of these bites, which are at a very reasonable price of 3 for $1.59, I was immediately immersed in a maple smell. I could have closed my eyes and imagined sitting at my kitchen table, hungover and ready to pounce on a short stack. Overwhelming pancake smell over took my car and made it hard to drive without floating away to parts unknown. 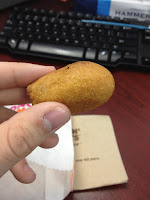 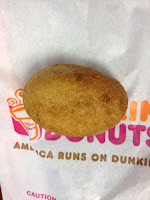 Looking at the bites, I was happy to see that they were quite girthy for something labeled as a “bite”. One could easily turns these into Pancake Double Bites and not feel ashamed. 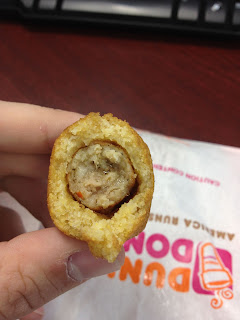 Biting down I got hit with Mr. Buttersworth piledriver to my tongue. Maple syrup and Bisquick to the face. The sausage link nugget inside was meaty and flavorful, and also provided a backup mapling. The batter was fluffy and didn’t taste too much like a corn dog like I had originally thought they would, but instead provided a pseudo genuine pancake taste.

Dunkin Donuts may have perfected the portable old time breakfast treat. Pop these bites into your gullet and I guarantee you’ll be begging for another 3 piece.