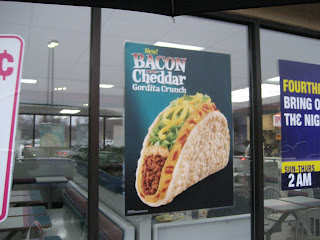 While the local McDonald’s still struggle with getting in the gimmick food that has been advertised for a week, Taco Bell already has their new gimmick despite not even being televised yet. Yes folks, Taco Bell is back at it again with multiple layered bun substitute creations. Before I go on, take a gander at this SNL skit entitled “Taco Town” and just try to wrap your brain around who is the butt of the joke.

Look a little familiar eh? Well Taco Bell has been at this for years, trying to create the ultimate layering of crunch, cheesy, and chewy. They even created a word, cruncheweesy. I’m sure Webster’s is fighting down the masses to keep this one out of this year’s edition. So after going to McDonald’s and again being shunned away like a one legged man in a punt, pass, and kick competition, I made the drive over to the Bell. The poster shined upon my eyes like a beacon light from the distance and I got that unique feeling you can only get whenever you realize that there’s a new gimmick out. Its like Christmas morning, a visit from the tooth fairy, and a trip to Cici’s all rolled into one. The feeling is only highlighted whenever you find out by pure accident.

Taco Bell usually skimps on their combos when it comes to their gimmicks. Usually only a beverage is included, but this time I was delighted to find that I’d be enjoying a taco as well. 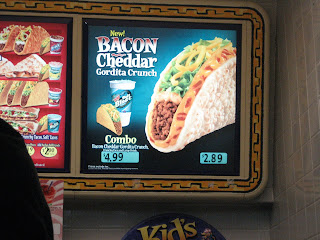 The Taco Bell at Pitt (The University of Pittsburgh) decided that it was a good idea to not install a fryer in their location, making a whole lot of the Bell’s tasty endeavors impossible. But being at home allows me to experience the full menu, like a son left for dead returning to his kinfolk.

First of all, lets take a look at the picture of this fold up. I have to go free lance on this one because I haven’t yet witnessed a commercial, where taco bell usually runs down their ingredients, but it appears as though we have a gordita shell, which is prompty toppled in shredded and melted cheese and bacon, which as the picture suggests is perfectly and evenly distributed throughout the cheese so that each piece of bacon is equidistant to the sun. We then have what appears to be a fairly standard beef taco implimented within this gordita shell, with beef, lettuce, and toppled with zesty, southwest cheddar sauce. ( I later found that Taco Bell’s website is “more than happy” to supply me with ingredients). Well thats the picture, so its time to take a thorough look at what the lifers at Taco Bell created for me. 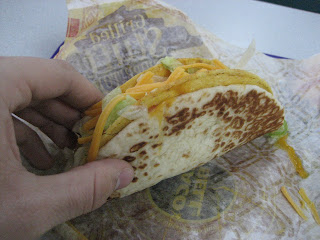 Its hard to see much of anything with this picture. From all we can tell from this view, we’re looking at a whole bunch of carbs, cheese, and lettuce. We may or may not have been gipped out of any form of meat. 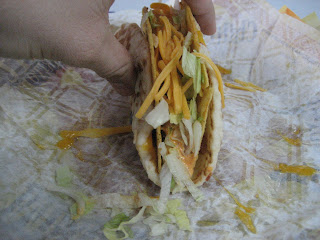 Its even sadder to say that this angle does absolutely nothing to reveal any more. There has to beef and sauce somewhere doesn’t there?

So upon initial viewings this thing looked flimsier than the last time I went to the mall school graduation. I decided I would need to investigate further. I put on my reading glasses and forceps and looked at the ever important area between the two shells. 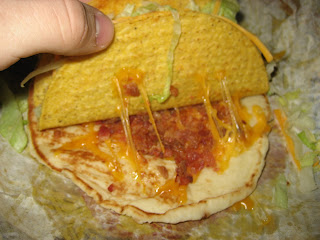 It is very clear that the Taco Bell employees do not know how to use their protractors. There is not even a clear coating of cheddar cheese on the shell, but what’s even more disheartening is the fact that the bacon is a jumbled mess, hoshposhed together like a bad episode of 60 minutes. I wrapped up this bad boy and took the ever important first bite. My incisors ripped through pita bread, cheese, bacon, taco shell, beef, sauce, and lettuce. It was an ever satisfying first bite, if for nothing else than the fact that the ground beef reared its ugly head. 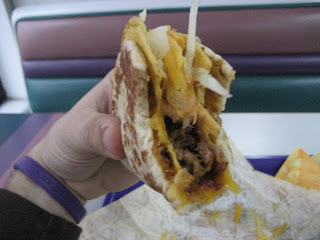 Overall, despite the fact that gimmick food never looks like the poster, the Bacon Cheddar Gordita Crunch from Taco Bell was very satisfying. It hit the spot and tasted like a mexican bacon burger, if that makes any sense. I’ll give it a 4 out of 5.

Now, lets take a quick look at Taco Bell’s step into the world of fruit infused beverages and other unique drinks. During the summer, Taco Bell introduced their line of Frutista Freezes. They were supposedly a smooth frozen strawberry drink that was topped with real strawberries. The word “real” just throws me off. I mean you can say anything is real, just as long as its made of matter and it exists. So instead of saying something like fresh strawberries, Taco Bell noted that these strawberries were in fact not figments of our imagination. Because I’m sure when Joseph Schmo is sipping on his Frutista Freeze he’ll need a lot of reassurance to know that the beverage in his mouth, does in fact exist. Because the Taco Bell at Pitt is lame, I had to wait until now to take a look at this beverage. Lucky enough for it to made it to a full time menu item, I decided that despite I already got a drink with my combo, I had to go for a freeze as well. Whenever gimmick items make it full time, you can either expect two things. The item has been perfected and when you order it you know what you’re gonna get, or it has been long been forgotten about and appearance is lackluster at best. 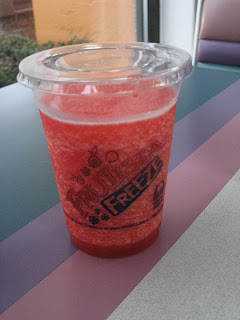 As you can see, this is a case of the latter. Only 2/3’s full and no sign of the Real Strawberries on top, I was greatly besmirched. Hopefully the it would at least taste decent.

The freeze actually did taste good. It had a smooth, real strawberry taste. It didnt’ taste like that “too good to be true Fruit Roll Up strawberry” and actually tasted like something resembling fresh. My entire life I’ve loved any kind of frozen drink, continuously oodling over them throughout my childhood, I’ve become quite the critic of consistencies and tastes. But I have to tell you we had a pretty consistent and flavorful drink here. And little did I know that the dark substance at the bottom of the beverage turned out to be the Real Strawberries. After mixing them in and even shimmyshamming one to the top, I can confirm that it was real. Still don’t know what that proves though. 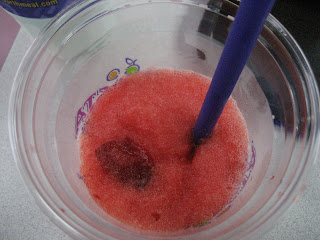 And lastly, I wanted to talk about Taco Bell’s exclusive Mountain Dew beverage Baja Blast. Its amazing to me still that this drink has stayed exclusive. I remember whenever this drink came out I was so excited that I forced my mom to drive me to the Bell just so I could try it out. Not being able to drive at the time, it was quite the fiasco to make pointless trips that I do so often now. 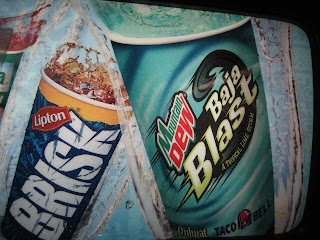 But Baja Blast is described as a tropical lime storm. Its a very refreshing drink and it reminds me of Taco Bell, which is easy to believe. It has a cool lime flavor that rips into your taste buds but then leaves you feeling that crisp refreshment that only a storm can supply.

Because of my color deficiencies I can’t really tell you guys what color it is, but it looks fairly unique to me as carbonated beverages go. 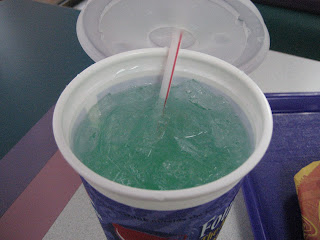 Because of the lackluster appearance and lack of real strawberries topped on I’ll give the Strawberry Frutista Freeze a 2.5/5 and I’ll give the Baja Blast a 4/5 just because its so unique.

Well that was a long one, but Taco Bell has enough gimmicks to choke a full grown goat. So happy holidays once again and we’ll hopefully be back soon with that new angus.