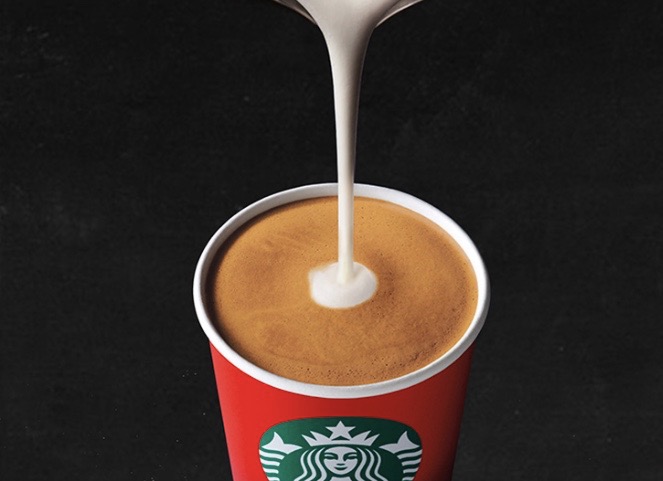 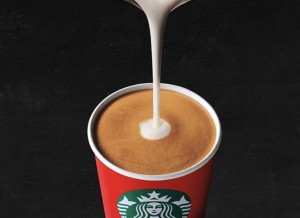 Starbucks Holiday Spice Flat White is the first time Starbucks is bringing the specialty seasonal flair to this espresso drink.  The Flat White is new to Starbucks this year, and now the holiday variety is hoping to lure some more people to try their latest offering.

When I heard Starbucks was adding a Flat White to their menu I was skeptical.  I’ve had my fair share of excellent flat whites at the Australian Themed Manhattan micro chain Bluestone Lane.  They were the ones that introduced me to the Australian drink and made me a believer.  Its a very subtle difference that sets a flat white apart from a latte, and I had doubts that a chain operating at the scale of Starbucks could execute.  I kept drinking my very expensive flat whites from my trendy local coffee shop and resisted the urge to try Starbucks until now.

Before I explain the flat white to the uninitiated, check out this super confusing graphic from Starbucks’ website: 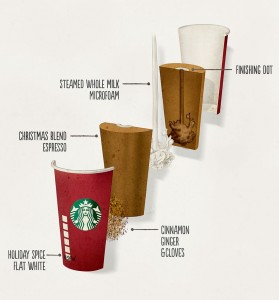 According to the above, I guess a flat white is a cup of espresso with a tiny core drilled in for the milk–similar to the new Ben and Jerry’s Core flavors. 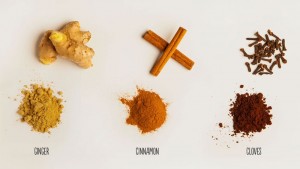 What makes a flat white a flat white is double ristretto shots, which are more concentrated than regular espresso shots.  And milk that is steamed to “micro foam” but not full blown cappuccino foam.  The idea is to create a strong espresso taste that can stand up to a velvety creamy milk.  For me this is the way to go, as latte’s can be a bit too much milk and not enough coffee.

Starbucks tosses in some holiday spices of ginger, cinnamon, and cloves with the espresso shots to give it a holiday flair.  They also mention citrus in the description but its unclear at what stage this is introduced.  They have a 12 steps guide to the Holiday Spice Flat White on their site, and it doesn’t appear to be mentioned.

Its worth mentioning that in Starbucks’ guide, two important steps are for the barista to write HSFW on the side of the cup, and also the finishing dot on the top of the milk.  Also worth mentioning, Starbucks LOVES the acronyms; PSL, TGL.

I went to a Starbucks in Midtown Manhattan on Day 1 and had a miserable experience.  The drink was just so tasteless.  There was no hint of holiday spice at all, the milk tasted so thin and watery and the espresso taste was just as weak.  I was so surprised by how tasteless this drink was, that I thought “maybe this was made wrong.”  I find myself thinking that a lot in the review game, but this was just so bad.

I know this was purchased in NYC, but at $4.84 it clocked in at more than at my high end expensive trendy local coffee shop where I order Flat Whites from on occasions.

Here’s the first attempt at the Holiday Spice Flat White.  Notice the random spattering of Cinnamon on top (no finishing dot) and the sticker label: 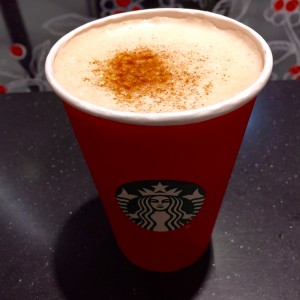 I knew something had to be wrong, so I decided to spend another $4.84 today and grab a second cup.  The results were way better.  These guys even tried to play by the rules too: 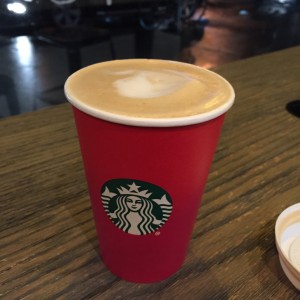 On my second cup, I could definitely taste the holiday spices in the drink, but it wasn’t overwhelming and gave the milk nice flavor.  True to flat whites, it wasn’t piping hot, so you can consume right away without ruining food for a week.  I was still pretty disappointed that the espresso taste wasn’t quite as pronounced as it should be.

Starbucks Holiday Spice Flat White is likely a welcome addition in markets that don’t have any alternative.  Flat Whites can be hard to come by, but if you have other options its hard to think of a reason to go to Starbucks for one.  Certainly not price, at $4.84 for a tall this is more expensive than a small at the local artisanal coffee shop that most of my friends think is too expensive.  To pay a premium for a mediocrely executed version just doesn’t make sense.  I will say that I did like the blend of holiday spices, but getting a Flat White right takes proper execution.

Starbucks is known for surprise dropping new drinks on their employees and taking the “learn by doing” approach.  I’ve often asked for new things on day one and had to point to the menu to prove that it exists.  I wish this wasn’t the approach because I’m $9.68 in the hole on one bad and one mediocre drink.  Its possible that this drink will improve over time, but as it stands, I won’t be back.