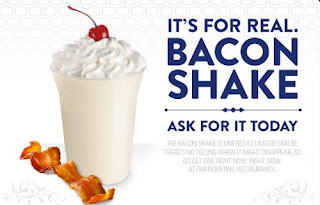 Yesterday we sent a distress signal out to the loyal FFG readers in the more fortunate parts of the United States with Jack in the Box locations. We wanted an inside scoop on the Bacon Shake from Jack in the Box in the worst way. Lucky for us, we have some amazing readers, and someone came through. Larry P from San Jose, California sent us his guest review last night and we have it for you in its entirety right here: 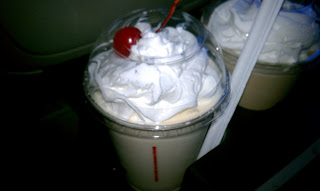 “After seeing the ad on your web site, I was intrigued and compelled to go try this unholy concoction for myself. At the drive thru I saw nothing on the menu indicating this bad boy was available, but lo and behold, they had it when I asked for it. Being close to many an In N Out burger here in San Jose, I am used to off the menu items, but I get secretly stoked when I come across a new one. 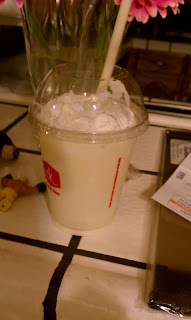 So, along with my order came the bacon shake, which was just under three semolians for a regular. It was close to the same color as a chocolate, but a little lighter, as it is a vanilla shake with syrup added. Was kind of bummed that there was no bacon on top nor a strip of bacon to use as a swizzle stick, but then again, jack and other fast food bacon is generally soggy.
As for the taste, it kind of reminds me of maple bacon. It is really good but it is not great, nor is it addictive like actual bacon.
I might get it again but I might not. If you are a bacophile then, as Ferris days, if you have the means, I highly recommend picking one up.
As an aside, my kids did not like it, so it is definitely a more adult oriented taste.
Thanks and follow me, @unclehullka on the T.”
So there you have it ladies and gents, Larry P thinks the shake is pretty legit. Disappointed with the lack of any actual bacon but still a pretty decent beverage on the whole. We want to thank him again for his contributions. Just for statistical purposes he told us he would give the Bacon Shake a 3 out of 5. Until the next backdoor basement launched gimmick, we’re out.
Bacon Shake: 3/5
~Fast Food Geek Staff
@fastfoodgeek