Update: Burgatory recently won the 2013 A.1. Burger Brackets Championship on Burgerbusiness.com, claiming the title of best burger in America for 2013!

The quest for the ultimate burger has been an ongoing process that has passed through generation after generation, lifetime after lifetime, animal byproduct by animal byproduct. But one thing has been clear for a long time, the perfect or near perfect burger hasn’t been discovered in the wild as of yet. But last Friday, I might have caught the closest thing in my mouth. 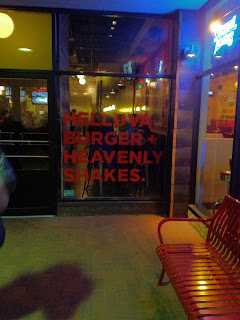 Burgatory Bar is located to the north east of Pittsburgh, smack dab in the corner of Waterworks Mall (there is also a mini location canoodled inside of the Consol Energy Center, the home of the Pittsburgh Penguins). While not actually a mall in the traditional sense of an indoor playground for skaters and hormonal teenage girls, Waterworks is a strip mall with a bunch of stores and restaurants lined up in a row. Nestled in one of the ends, is this ridiculously popular bar/grill, that produces Pittsburgh City Paper’s Best Burger in Pittsburgh for 2011. For months I have heard rumors and hushed secrets of their amazing Create Your Own Burgers and Heavenly Shakes, so this Friday I decided to orchestrate a Burgatory trip with my girlfriend and another couple for my birthday celebration.

The first thing to know about Burgatory, is that it is incredibly popular and undersized. Word leaked out some time ago that this place had amazing food and milk shakes to die for, thus the wait for a table of any kind usually is measured in hours, not minutes. The same was true on Friday, even though we didn’t arrive until around 8:30, we were quoted an hour and fifteen minute wait. 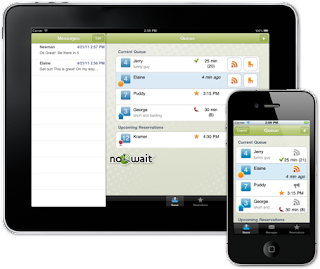 But thankfully, Burgatory has streamlined the process with the nifty app called No Wait. An app that runs on a restaurant’s iPad or iPhone, the customer gives the hostess a phone number at which they can be reached, and then based on the happenings at the restaurant will send the party a text message whenever their table is ready. You can even check out a link in the initial text you receive that tells you how many parties are still in front of you. This clutch feature, makes it so you can roam around the surrounding areas, shopping, or even guzzling some beverages at another local establishment while waiting. 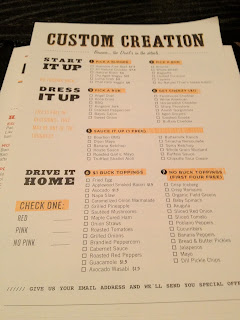 So after a couple of brews at the nearest Chili’s and about an hour later, we got the text message to head back to burger paradise. Sitting down, we were all highly anticipating the festive feast ahead. The create-your-own burger process is fool proofed with a pad/pencil technique. Taking a mini golf pencil to the lengthy sheet of paper, allowed you to fully customize your burger, with millions of possibilities at your disposal. With differing options, for bun, meat, cheese, rub, sauce, and enough toppings to drown a horse, the food geek in me was in hog heaven. The first sauce and many toppings come with no additional charge, but cheese and other premium toppings come at $1-$1.50 charges, so if you go buck wild your burger could tip the scales price wise. 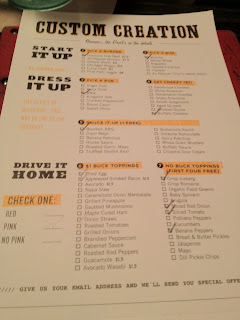 I decided ahead of time, yes I strategized well in advance, that I wanted to go with a BBQ themed burger with a twist. Going with the Burgatory’s hormone free, all natural, beef option (although bison, wagyu, crab, and grilled chicken are also available for additional fees), BBQ rub, Bourbon BBQ sauce, and Buffalo Cheddar Cheese. I had to add the traditional western style burger toppings of bacon (applewood smoked) and onion straws alongside of the pretty typical lettuce, onion, tomato, and banana peppers. My curve ball came whenever I threw on the fried egg option to top off this bohemoth.

Truth be told, I was pretty much inspired/copied the initial picture on the Burgatory website, because I figured, that I might as well get the most well recognized burger option available. As a side note, all of Burgatory’s burgers come with Sweet & Russet Potato Chips homemade on the premise, although fries are available for a tariff of $1.50. 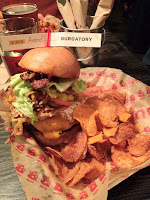 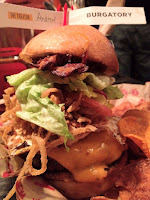 Our burgers came out promptly, and all I can say is that mine was stacked, packed, and ready to attack. Definitely the largest topping tower I had ever seen. Despite the picture on the site, the chefs decided to go buck wild, piling my burger til it almost hit the ceiling. As you can see in the photo below, the burger to head ratio was almost a staggering 1:1. 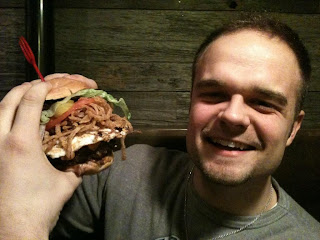 Trying to pile the whole thing into my mouth for a uniform bite from bottom to top was an extreme challenge and I’m pretty sure my jaw almost came unhinged. All I know is what I bit into was pure gold. From the fresh beef, to the crisp toppings, to the sweet sauce, and the bold cheese I was in a carnivore’s paradise. The burger may have been hard to handle, by my own design, but everything in there was scrumptious. The bacon was seasoned and crispy, the onion straws were fried to a golden crunch, and the egg provided just enough flair to get noticed. 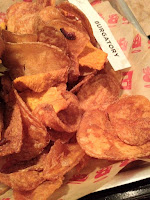 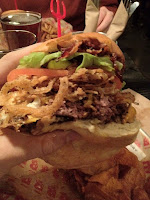 The potato chips that came alongside of the burgers were crispy and flavorful, although some of them came out a little over cooked. My friend went with the french fry option, and let me know that they were crispy, light, and had a little sweetness to them if that’s what you’re into. 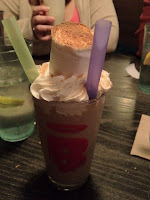 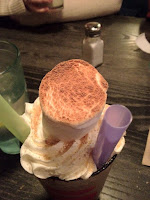 Lastly, I have to comment on the milk shakes that Burgatory serves up. Self labeled as “heavenly”, I’d have to report that this advertising is right as rain. Coming in both alcohol laced and traditional offerings, each shake has chunks intermingled, that are distributed through a wide mouth straw. I shared the Campfire S’Mores option with my lady and in one word it was fantabulous. Each sip had real chunks of chocolate and graham cracker coming through to create the ultimate illusion of the real thing. The shake was even topped off with a large toasty mallow. Pure heaven indeed. 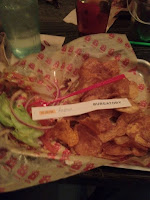 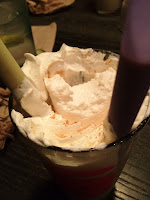 I’d have to give the whole Burgatory experience a godly 4.5/5, with the only complaint coming regarding the long wait. But if they’re that popular, you know its good. So if you’re ever in this part of the world, you have to put Burgatory on your Leap List. You won’t go home hungry. 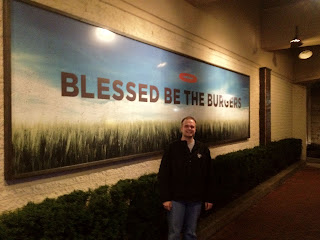