The Shamrock Shake has been a calling card of McDonald’s for decades.  In a previous news report, I chronicled the trials and tribulations of the sham shake, all the way into cult craze stardom.  McDonald’s realizes the zen like appeal to this mean green monster because it seems like they come out earlier and earlier every year now.  Local Pittsburgh celebrities, especially 96.1 Kiss Morning Freak Show disc jockeys, Mikey (@fsmikey) and Big Bob (@fsbigbob), have been shouting about the shake’s release to the highest of the high heavens this week, sending western PA and all of it’s McDonald’s locals into a feeding frenzy.

With the mass hysteria ensuing, I had to perform a quick call around to three of the local establishments just to make sure they weren’t out of the sweet nectar.  Finding a location whose shake machine was functioning and hadn’t yet run out of special syrup was a bit of a chore, but after confirming a location, it felt like I had located the Northwest Passage.  Following in the footsteps of Lewis and Clark, I rambled into the McDonald’s alongside my girlfriend, a self proclaimed mint enthusiast, to utilize her second opinion. 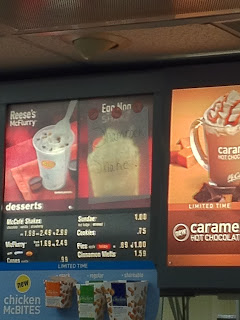 After walking into the restaurant, I did not notice any advertisements after a quick once over.  Panic started setting in.  Finally, we realized the back woods patch job performed in the photo above.  The photo is well worth a click, as you can see, someone literally wrote the words “Shamrock Shake” over the ad for the ill fated seasonal Egg Nog shake, and felt that it was sufficient enough to do the trick.  Hard not to laugh at that “boy howdy” attitude expressed at the local McD’s. 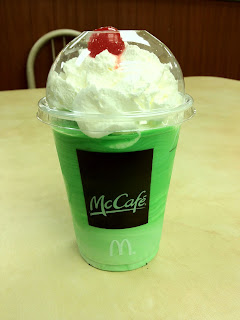 After waiting in line for what seemed like days, it was finally time to order.  Watching the Shamrock Shake being made was a bit of an eye opener, with the process being so idiot proof, that an antelope could probably perform the simple steps. The employee then bellowed out “two small special shakes”, in a reference to the shake machines 4th button besides chocolate, vanilla, and strawberry, and we had the green lanterns in hand. 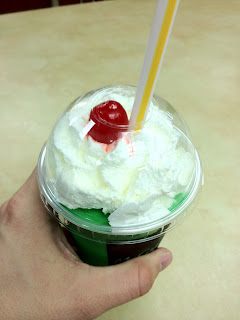 As I mentioned in the news post, McDonald’s, in association with McCafe, have dolled up the shakes now, with translucent containers, whipped cream, and a cherry for good measure.  I’m beginning to think I liked the old days more, whenever the Shamrock cocktail was more of a mystery, and you couldn’t really see the neon green radioactivity going directly into your mouth except for the slight tint of the straw. 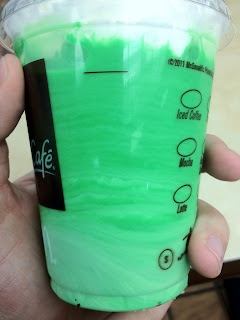 The vanilla based shake and the swirls of Hulk’s special sauce give the beverage a gnarly appearance.  It really looks like the shake needs to be stirred up a little more, with the mint swirl taking to the ice cream like oil over water.  Sipping in, I was in a minty wonder world.  Overwhelmed with the classic flavor that had attracted throngs of people since the 80’s, I couldn’t help but be bombarded by a harsh after burn.  After sipping into my girflriend’s and noticing that hers was even worse, going down like battery acid, I began to question the syrup allotment we had received.
Because of the fact that I’ve had sham shakes in the past, I can tell you that my prior experiences were better.  I simply think that we just received way too much syrup, especially the second one we had.  I don’t think this is a nationwide crisis, just a simple distribution error at this particular location, chugging out more neon green dye than a homo sapien’s mouth can withstand. Surprising with such an idiot proof process…

Though I’d like to see them go back to the paper cup format, the whipped cream was a nice subtle addition here, and although these particular shakes weren’t the best, I have faith that other locations are still chugging out the famed riot producing shakes so many love.  Also, I think that if they made a chocolate based mint shake and called it the Dirty Shamrock, the world would be set ablaze.
Shamrock Shake: 3/5
~Andrew
@atkpitt12
Shamrock Shake (Small): 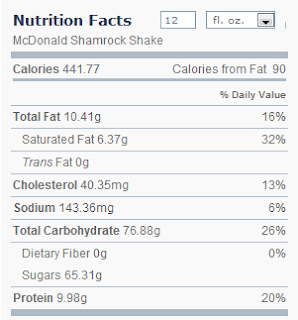