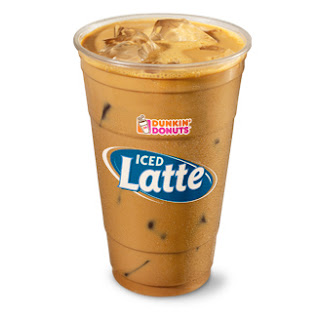 America’s quest for caffeine has hit the boiling point. From coffee pots peculating perpetually, daily Starbucks stops, and other desperate 9-5er’s dabbling into other realms such as hourly energy drinks, its pretty clear that we’re all slaves to this magical drug.

Dunkin’ Donuts is one of America’s biggest pumper of the jitter juice. With ad slogans claiming “America Runs on Dunkin'” and commercials with working class Joes and white collar Wilfords alike proclaiming their beverage of choice, its hard not to agree.

Today, in need of something to jolt me through the rest of the work day, I dipsee doo dunkarooed my way to double d’s and dabbled in one of the most daunting, audacious, over complicated, and high maintenance beverages I’ve ever come across. The Gingerbread DDSmart Iced Latte.  Continuing our ongoing expedition to find the best “holiday” spiced beverage, I figured that it was time to go ginger sauce.

Gingerbread is that spice that inevitably reminds you of those cookie treats, that are shaped like humans and served almost exclusively around Festivus and Christmas.  Gingerbread, which is a mix of honey and spices has a very unique, polarizing taste, that isn’t for everyone. Described by some as, others as delicious, it boils down to  a love it or leave it flavor savor. 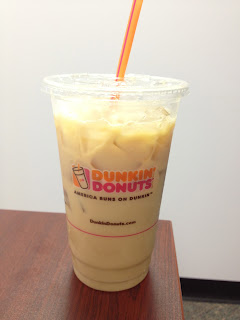 Sipping into my latte, I felt pretty precarious. I had become one of those mainstream, tight pants Terry’s that you see on ABC Family.  Regardless, I took all preconceived notions and threw caution to the wind.  Sipping merrily I was overwhelmed with refreshment.  The icy cold nature of the latte was very lively, and had a bold espresso taste.  Intermingled was the gingerbread flavoring, which whispered in my ears sweet nothings of grandeur and glory. 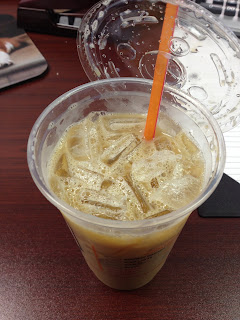 The varying tastes might confuse the untrained pallets, but for those coffee enthusiasts out there, you’ll feel like Hansel or Gretel wrist deep in ginger stains.

Ordering the DD Smart variety of the treat which basically means they use skim milk instead of the whole variety that’s thicker than Oprah’s thighs after a trip to the Sizzler.  This saves you 60 calories and 6 grams a fat.  My main complaint about the iced latte concept is the lazy cheap ass approach of loading the cup with too much ice. We get it, it’s supposed to be cold, but we want some actual beverage to go along with our frozen water.  Finishing the drink I was disheartened by the half cup of ice leftover, filled with despair of what could have been. 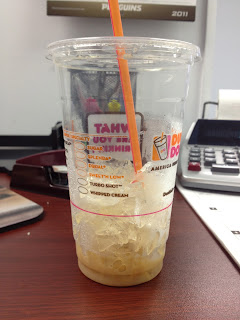 With its healthy nature, complex taste, and over abundance of ice, I’ll have to give the Dunkin’ Donuts Iced Gingerbread Latte a 2.5.  If you like cold drinks and need to make it through the afternoon without your head on the keyboard try one for sure. 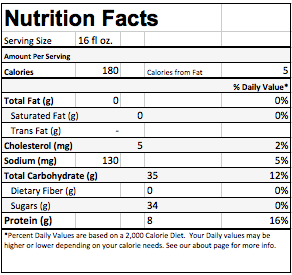